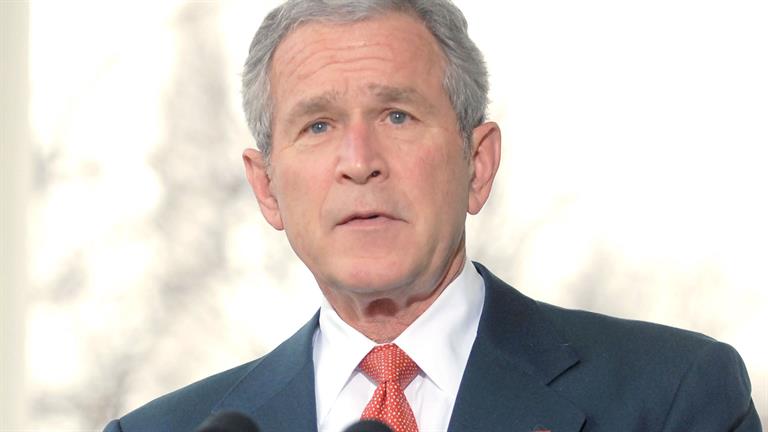 The DOJ announced on Saturday afternoon that, due to the escalating conflict in Syria, an investigation into the number of civilians killed by drone strikes would be launched. Between 384 and 807 civilians were killed by US drone strikes in 2009 alone, in a total of 563 attacks. President Barack Obama’s numbers in his first year were nearly 10 times that of his predecessor’s entire presidency, and resulted in up to about 750 more deaths. Understanding that the unnecessary bloodshed could be considered a war crime, the DOJ moved forward with a suit against President George W. Bush.

“It’s simple,” said FBI director James Comey, “because Bush started the conflict, anything Obama did to make it worse is just Bush’s fault. Obama could never be blamed for his own horrendous decisions as long as we could blame Bush.” Citing the economic recession which began at the end of Bush’s term, and has yet to fully recover almost 9 years later, Comey suggested that the same logic applies to anything Obama did ever.

More interestingly, Nancy Pelosi remarked in early February that “While it’s only been a couple of weeks since the inauguration, we’ve seen nothing that I can work with President Bush on,” implying that the same standard may apply today, and Bush will also be blamed for Trump’s many mistakes. The extent to which this blame game will be played remains unseen.

While Obama was quick to take credit for the killing of Osama bin Laden in 2011, he explained in an interview last week that “as much of a success as the mission, was, we can’t let it distract us from the fact that George W. Bush caused one of the helicopters to crash into a wall on descent.” The former president did not elaborate on how exactly Dubya was involved in that specific part of the incident, but he was clear in his declaration that “we could have saved millions of dollars if the stealth helicopter I approved for the mission had not been destroyed by George Bush.” The former first lady also had words for the second Bush about her husband’s late work hours in 2014. “There were nights,” Mrs. Michelle Obama sighed,”when Barry would be up until 11 or 12 at night making sure that the healthcare plan most of the country didn’t want would be properly enacted. It just kills me that without Bush’s 57 drone strikes I’d have been able to spend more time with my husband.”

Perhaps the most startling accusation, however, came from John McCain, when he stated that “The only conclusion you could draw when he walked away from the presidency after Obama’s inauguration is that he’s working for Putin.” Given the bipartisan support for the investigation of Bush’s war crimes and connection with Putin, and his possible role in attempting to sabotage the bin Laden mission in 2011, it is likely that the process will find Bush Jr. guilty.

EDITOR’S NOTE: THIS IS CLEARLY SATIRE! PLEASE DO NOT FREAK OUT OVER AN APRIL FOOLS’ JOKE. CALM ONESELF, TAKE A BREATH, AND EAT A BANANA. A NICE, HEALTHY, YUMMY BANANA…