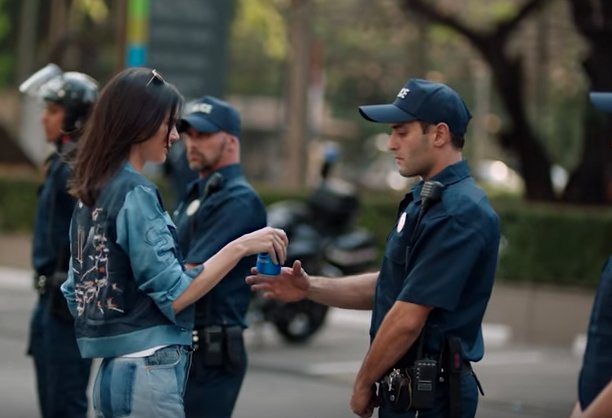 In what was supposed to be a picture of humanizing unity, in a time of unrest, Pepsi Co. and model Kendall Jenner produced a commercial which shows a protester handing a can of pepsi to a police officer mid-protest. Unfortunately, the idea backfired and has unleashed a vicious storm of criticism on both the cola company and the starlet.

The commercial is being criticised by people who have interpreted it as a co-opt of the resistance movement whilst featuring a privileged, white, famous young model using a drink sold by a massive conglomerate to create peace between activists and law enforcement.

Upon seeing the commercial, many also took to Twitter to unleash their fury, completely missing the message of the storyline and perpetuating the tribal attacks with unproductive dialogue.

"Kendall please! Give him a Pepsi!" pic.twitter.com/IntFNmCpTr

So… I guess my country needs more than a #Pepsi. #Venezuela #PepsiCommercial pic.twitter.com/rNaB9ho2Ng

A MASSIVE RIOT is erupting. Suddenly, a Pepsi truck approac

Pepsi did release a statement on what the purpose and message behind the commercial was supposed to convey (per Independent):

“This is a global ad that reflects people from different walks of life coming together in a spirit of harmony.

“We think that’s an important message to convey.”

Independent reports that Jenner has yet to comment on the backlash.

A similar advert was released by Coca-Cola in 1971 which was based on the Vietnam War, explain Independent.

NASA Wants A Space Station Around Mars By 2028, But Major Scientists Aren’t So Sure