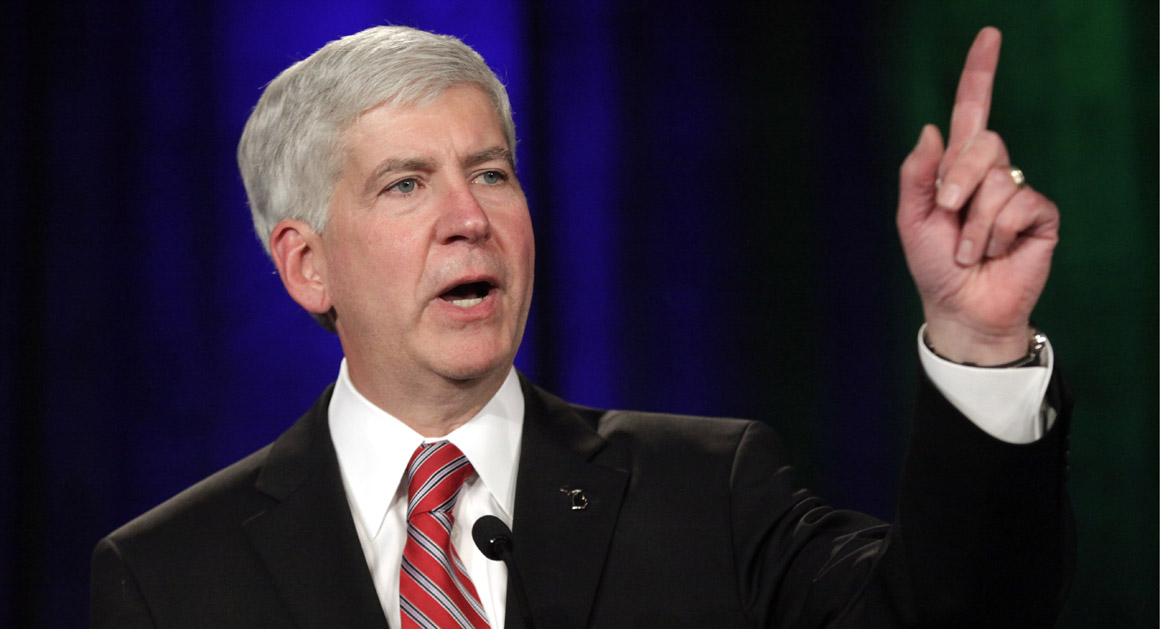 Michigan Republican Gov. Rick Snyder is getting slammed after one of the governor’s trusted aides torched a Flint activist who believes the state has continually turned a blind eye to the 2016 lead-water scandal.

“Just crawl back into whatever hole of illusion you reside in and hope that lazy reporters will occasionally forget that you ceased to be relevant long ago.” Snyder’s Flint recovery-effort point man, Rich Baird, typed in a text message to former Flint mayoral candidate and activist Arthur Woodson. He sent the text shortly after Woodson criticized the Republican governor in a February article for his handling of the crisis.

“If you get Richard Baird right now, if he goes on trial, they will starting looking because they know Rich Baird,” Woodson told The Detroit News in a Feb. 26 interview. “They know that’s Snyder’s right-hand man. So they’d feel like that would be close to getting Snyder.”

Baird went on to excoriate Woodson for suggesting Snyder had all but abandoned the people of Flint.

“But you have not earned the right to disrespect our governor who does not deserve to be vilified by those who have no basis to judge him. … You can say whatever the hell you want but know that when judgement day comes, I will not be turned away based on the hatred of people who don’t even know me but think they can talk about me. Don’t bother responding Art,” Baird texted.

The texts were part of “a personal conversation that unfortunately took on a less than civil tone,” Snyder spokeswoman Anna Heaton told The Detroit News. Baird was not speaking on behalf of Snyder, she added. The governor came under intense scrutiny after officials switched the city’s drinking water in 2014 to the corrosive Flint River, which ultimately contaminated the water supply.

The scandal led to an investigation and a spate of criminal charges against state and local officials. Michigan Attorney General Bill Schuette charged Michigan Department of Health and Human Services Director Nick Lyon in June 2017 with neglecting to inform the public about an outbreak of Legionnaires’ disease in the Flint area shortly after high levels of lead were discovered in the city’s water supply.

Shuette, a Republican, brought charges in 2016 against three other state employees connected to the years-long crisis. He also brought charges against Health and Human Services employees Nancy Peeler, Robert Scott and Corrine Miller. The three state employees allegedly withheld or disregarded blood tests showing high lead levels. But Lyon is the highest-ranking official to be charged.

Baird’s comments come less than a year after another government official went on racially charged tirade against Flint’s predominantly black population. The root cause of the water crisis was black people refused to pay their water bills, a Flint official suggested in May 2017.

“Flint has the same problems as Detroit — f***ing n***ers don’t pay their bills, believe me; I deal with them,” government-operated Genesee County Land Bank manager Phil Stair reportedly said in a May 26 conversation with environmental activists. Stair, who is white, claimed the city’s black residents’ failure to pay their bills caused price hikes, which ultimately prompted officials to switch Flint’s water supply.

Genesee County Land Bank is a government organization that manages foreclosures in the Michigan area. Stair’s comments followed Flint City Council members approval of a one-year moratorium on liens after citizens protested the city’s threats to foreclose the homes of nearly 8,000 people affected by lead contamination.