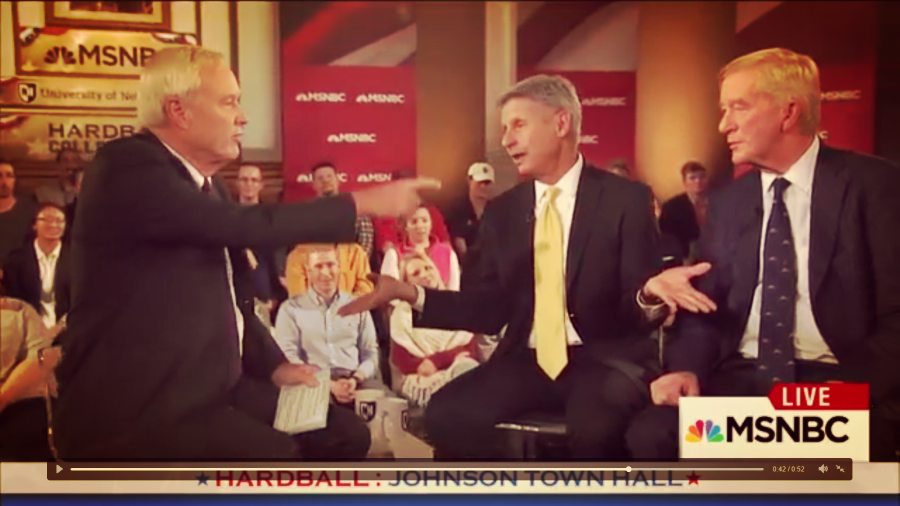 Remember when Gary Johnson finally got mass media attention, but not over meaningful consideration of his candidacy, regarding his recollection of the word “Aleppo?” Johnson was asked to name a world leader that he looked up to and respected. Gary seemed to have thought of a person, but couldn’t seem to recall the name right off the bat. Therefore, I am guessing there will be yet another onslaught of media outlets regurgitating the same type of click-bait headlines at the expense of real meaningful context of Johnson’s latest instant memory recall issue. Although he admits to having an “Aleppo moment,” notice how media and others will exaggerate this into him not being able to even name a single foreign leader at all.

Haven’t you ever been asked a similar question, and you can even see the person in your mind, but the name of who you’re seeing escapes you for a moment? That common human experience may have just happened to Johnson, but of course it was on live television. Therefore, I am guessing the media influential response will be immature and unreasonable. I am hoping, however, that the American public can again relate to his experience so the bias’ media does not win in their smear attempts.

Gary Johnson fails to name ONE foreign leader and claims to “Aleppo moment” he is also not much of a liberal. WOW. #hardball #ImWithHer

Have you noticed you’re only hearing about Johnson’s flawed moments? Notice descriptions being exaggerated from Johnson not naming a living foreign leader that he looks up to as opposed to not being able to name a single foreign leader? You hear of nothing else it seems in mainstream media anymore. There are actually very strong points the media could compare the Libertarian nominee to the other two old party candidates:

Hillary Clinton can’t recall how many times she’s passed out.

Physical fitness qualifications to be POTUS: Between all three candidates who will be on the ballot on all 50 states, Johnson is the most physically fit to be President of the United States. He is not over-weight and he wouldn’t be the second oldest President in United States history, but he has many physical achievements such as being an Iron Man and climbing Mt. Everest with a broken leg. When the media was hooked on whether Donald Trump was mentally & physically fit, or if Hillary Clinton was healthy enough to endure four years of presidency, mainstream media wasn’t talking about how physically fit Johnson was in comparison at all.

Experience qualifications to be POTUS: He also has more experience in executive governing. Johnson has served as Governor of New Mexico as a Republican for two terms. His vice presidential running mate, Bill Weld, also has the same experience but in Massachusetts. Both ran and won as Republicans in states that normally send electoral votes for Democrats, both were re-elected to serve second terms, and both have bragging rights over their achievements in doing so. Trump has employed many who are supervised by people he’s hired in management. That’s something to brag about for sure, but it’s not the same kind of leadership that Johnson and Weld have in government. Hillary has experience in government, but not at all like running an entire state. If you believe the rumors of how extremely controlling she was in the White House, you may see her to be more experienced than the Libertarian ticket. But otherwise, the massive experiences the Libertarian team brings is not really discussed in a meaningful way in comparison with the other two old party candidates.

Since the media has no real desire to include Johnson and Weld on the same platforms as Hillary and Trump, you might want to get used to lots of “yellow journalism.” News articles, even from seemingly respected journalists and media outlets, will report exaggerations on what Johnson says and does. Why? It sells papers, it drives traffic to their sites, and it plants a seed in your subconscious that the world thinks he’s so unintelligent that he’s not even intellectually qualified to be president. We are talking about a man who has proven determination by accomplishing massive physical feats. We’re talking about a man who has successfully led a state with accomplishments such as a huge budget surplus and increase of jobs. But the problem is it seems only the Libertarians, libertarian media, and the few libertarian-leaning celebrities are talking about these things.

As an example, the media overreacts to Johnson sticking out his tongue during an interview. The obvious point he was trying to make was that he didn’t need to say anything at all if he gets in the debates, all he needs to do is show up and let people know there’s another person on the ballots and on the same platform equally with the other two privileged candidates.

Then of course you have the infamous “Aleppo” incident. Although the media tried and tried to make Johnson appear to be intellectually unable to have a single thought, the people actually related to him as the media described Aleppo in different terms rather than commonly using the exact name of the location. Even a major publication got their info wrong trying to correct Johnson. But thanks to the “Aleppo” incident, Google searches soared for the word and more people were made aware of the problem.

Now, however, Johnson is being asked a question that is better left unanswered anyway. What world living world leader do you respect and look up to? When you’re running for president and your campaign is to keep government out of your pocketbook and out of your bedroom, you may be hard pressed to find other living world leaders you can look up to and say you can actually respect & look up to them. They’re all in your pocketbooks, personal life, bedrooms, etc. There was no good answer there to begin with.

Gary Johnson had an “Aleppo moment” after @hardballchris asks who his favorite foreign leader is #JohnsonTownhall https://t.co/nRazpPL0q0

Do you see what just happened there? Why does he have to name a foreign leader he likes and respects? None of the current leaders are truly about the kind of freedom he has been talking about. I would feel very uncomfortable answering this question as there’s not currently a really good example of a world leader that best describes what I feel should be gloriously praised.

The world is filled with corrupt politicians. There are no leaders. But I doubt that answer would’ve gone over too well… https://t.co/fbFdWqOKFG

I happen to agree with Tiffany Hayden, who is the Libertarian Party Congressional Candidate in Detroit, Michigan. I also pondered on this question, at the host’s level, for a while and I cannot think of one world leader who is leading the advancement of massive meaningful freedom in the world. Can you find a modern day Benjamin Franklin or Thomas Jefferson leading a world nation today?

If we pretend he answered the question fast and easy, the media may just attach all that leader’s flaws to Johnson rather than the achievements he respects from that particular reader. I believe the whole question was a trap. I believe things like this will happen again, but I don’t suspect they will report the same question and answers the same way with Hillary and Trump.

About those foreign leaders…Better question: Why are all the Hillary mouthpieces so concerned about Johnson/Weld? https://t.co/YDU6AuOFTD

The majority of some of the most popular media outlets are completely biased. There’s no law that requires them to report the entire truth within the entire context. Media outlets are categorized under “entertainment” and not as some sort of official resource of historical truth. So please consider these things when reading anything from media. Consider their possible spin on truth perspectives, and find opposing views. Perhaps then you will see more of real truth rather than joyful sounds coming from the choir your ears are itching to hear.

What are your thoughts on “yellow journalism?” Can you name a living world leader of a nation that you respect and look up to in terms of making a people more free than ever before? Remember to beware of the “flaws” trap mentioned above. Good luck with your answers, I would love to see them in the comments.

Obama is Right on Problems with Saying “Radical Islamic Terrorist”