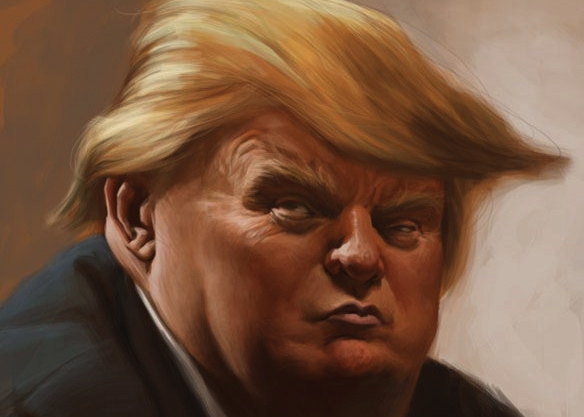 It was bound to happen someday, but someone has finally bested James Carville when it comes scaring small children across the nation–Donald J. Trump.

Whereas Carville’s spooky appeal is more a joke having to do with his gaunt appearance, harsh accent, and mannerisms which suggests he feasts on embryonic stem cells for breakfast, Donald Trump’s bogeyman status is no laughing matter. It’s an expected effect of his careless words and fear mongering.

But now, a young American mother has taken it upon herself to call out Mr. Trump for scaring her son.

There’s really not that much to be afraid of in the small, liberal town where we live. Here, my third-generation American kids have built a life filled with guitar lessons and choir concerts, soccer and kung fu. And a healthy dose of Harry Potter fever between weekly Quran lessons. For a Brooklyn girl like me from an immigrant family, this is about as close to the American dream as I could imagine for my kids. Brown and Muslim and completely American.

Nothing could have prepared me, however, for that moment when my eight-year-old son came to me, wide-eyed, and asked if we were going to have to leave the United States. “Donald Trump says he won’t let Muslims into the country, Mommy. Are we going to have to leave? He says he’s going to ban Muslims. This is our home, why would he want to ban us?” he asked.

In that moment, my carefully cultivated idyllic world was shattered. I was speechless before the very real fear and vulnerability that I saw in his eyes. He looked to me for reassurance. I had none to give him. Trump stole something from my son: his sense of belonging. Wherever we have lived in the world, my son would always say America is home. It’s where he felt safe. It’s his comfort zone. And in one stream of vitriol, Trump took that away from him.

Pasha, a journalism teacher at the University of Massachusetts-Amherst, continues her story, telling us how she tried to console her son and reassure him the America she knew wouldn’t fall into such a waking nightmare. But it wasn’t enough for her son:

Later that night as I kissed him goodnight, he grabbed my hand tight. “You sure that Donald Trump won’t be able to find our house?” he asked. My son didn’t really believe my reassurances that we weren’t in trouble. I can’t say I blame him. And for that, I will never forgive the man who so glibly destroyed my son’s faith in his country. Words matter, Mr. Trump. Your words mattered to my son. And the damage those words caused will have a lasting impact.