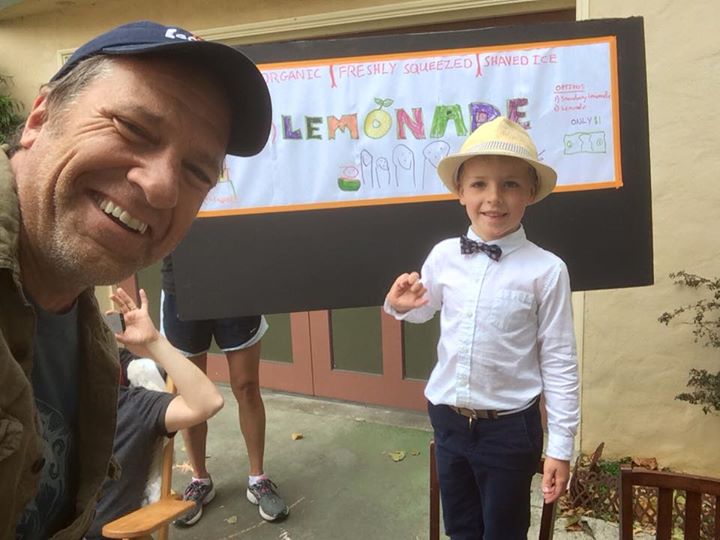 Mike Rowe made a Facebook post about his encounter with the youngest, savviest, cutest, most debonaire entrepreneur ever.

It was a negotiation from the start. Alexander wanted to sell me a cup of fresh-squeezed lemonade for $1. I wanted to pay 50 cents. So we haggled.

I argued the key ingredient – water – was free. Alexander reminded me there was a drought in California.

I pointed out that a glass of cool lemonade served on a chilly, overcast day like today, was less valuable than it might be on a day that was hot and sunny. Alexander pointed out the importance of staying hydrated in all temperatures.

I said a glass of lemonade served just around the corner could be purchased for the same $1, but included unlimited refills.

He said that theirs was a “crappy national brand,” filled with extra sugar and “perfect for anyone who wanted rotten teeth,” whereas his was “fresh- squeezed from lemons grown in his mothers backyard, with a sufficient but modest amount of sugar added.”

He went on to discuss the cost of cups, marketing, signage, and of course, payroll. He then suggested my purchase would help support a small business, and that my patronage would forge a relationship with the owner and sole proprietor of a nascent but growing concern.

In the end, we settled on $2, which included the lemonade, a strawberry, and permission to post this photo.

Assuming he can get out from under his student loans, I think Alexander will do just fine…

This kid is as cool as his fedora. Wait… did he have a permit for his lemonade stand?!