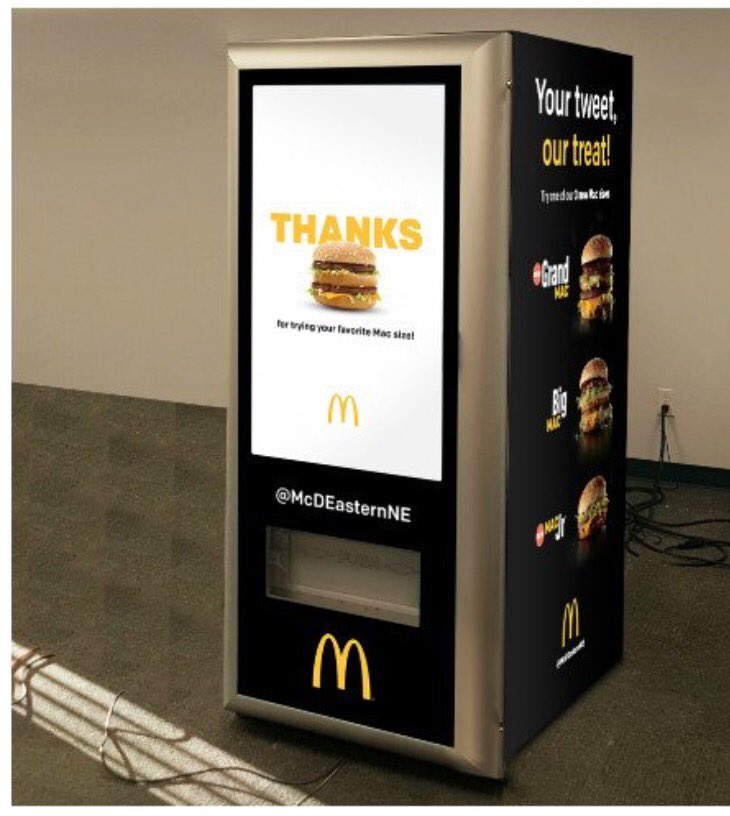 A Boston McDonald’s is set to launch a machine that dispenses the fast-food chain’s trademark sandwich, the Big Mac.

The automated cheeseburger machine will offer three different sizes: traditional, the Mac Jr. and the Grand Mac, according to Metro Boston. The sandwiches are expected to be free of charge and available for a short time period.

Say what?! A Big Mac ATM machine, where you can order real Big Macs, is coming to the Pru/Copley on January 31st. https://t.co/fjMZcrLpr7 pic.twitter.com/MGRxplpsRI

People in the area can obtain the stacked sandwich without conversing with any humans, which seems to be part of a trend for casual restaurants. (RELATED: Two Men Overdose On Heroin At McDonald’s, All Caught On Facebook Live)

Wendy’s, another popular fast-food establishment, announced plans in May to start installing self-serving kiosks at some of its over 6,000 locations later in the year. The chain is replacing cashiers and other low-skilled jobs with computers and automated machines because, as Wendy’s president Todd Penegor told Investor’s Business Daily, it has to compensate for wage hikes.

McDonald’s Europe President Steve Easterbrook announced in 2011 that the fast-food restaurant was planning on “hiring” 7,000 touch-screen cashiers to be installed across the continent, according to CNET and the Financial Times. Easterbrook said it would make transactions more efficient — namely lowering the average interaction three to four seconds each.

“You don’t need to communicate with staff and it would be much quicker,” said Weiky Filho, a student enjoying a burger at McDonald’s in London, according to the Financial Times.

“I’m looking for work and if there’s more machines doing jobs I’ll find it harder. Plus you won’t get service with a smile,” said 21-year-old Joe Surkitz.

Chelsea Manning Was NOT ‘Harassed,’ Says Former Squad Mate. He Was Not A Team Player