After officials of the wealthy oceanside enclave home to many of Hollywood’s elite actors and power brokers had the sign removed, the prankster replaced it with another welcome sign for visitors Wednesday. This one also had “Official Sanctuary City” in bold letters across the top of the sign, and in italics underneath: “Because Our Beach Community Needs Cheap Labor. Dude.”

Both were posted below the city limit sign along a road leading into Malibu. 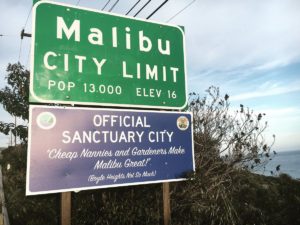 This sign posted at Leo Carrillo beach yesterday is a "prank" council member @RickMullen90265 told local news and will be taken down asap. pic.twitter.com/vHG5hDjSzs 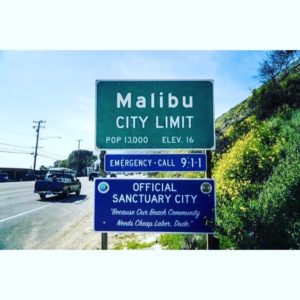 ANOTHER SIGN? Apparently sign is not up anymore but the effort to humiliate #malibu continues. @THR @NBCLA @KTLA @DanielleGersh @pshanley88 pic.twitter.com/lnhVCTfvae

Actor and liberal activist Martin Sheen promoted the campaign for Malibu’s sanctuary designation, which was approved last month by the city council in a 3-2 vote. The decision was panned as largely symbolic, with some critics noting out that the city’s building restrictions and multi-million dollar estates put it out of reach for the illegal immigrants it is attempting to shield.

Malibu city manager Reva Feldman called the clandestine addition an “unfortunate prank,” and said local authorities were “working on it.” The Los Angeles County Sheriff’s department told The Hollywood Reporter, however, that an official report has not been filed and no investigation into the prank is currently underway.

The signs are a sly jab at what some critics have called an empty gesture by a city that welcomes Hispanic immigrants mostly as gardeners, hotel workers and restaurant help. As the Los Angeles Times noted in a story about the sanctuary designation, Malibu is about 92 percent white and one of L.A. County’s richest cities.

The right-leaning street artist Sabo, who has carried out similar art-pranks in the L.A. area, denied responsibility for the Malibu signs but told The Hollywood Reporter that “some friends of mine put those up last night.”

“They aren’t big on getting attention seeing they work in the Hollywood industry and as well all know there is a serious Black List in full effect focused on those of us who aren’t on the Left politically speaking,” Sabo said.

Ex-Chief Scientist: Our Advice To Gov’t On Preventing Global Warming Was Wrong