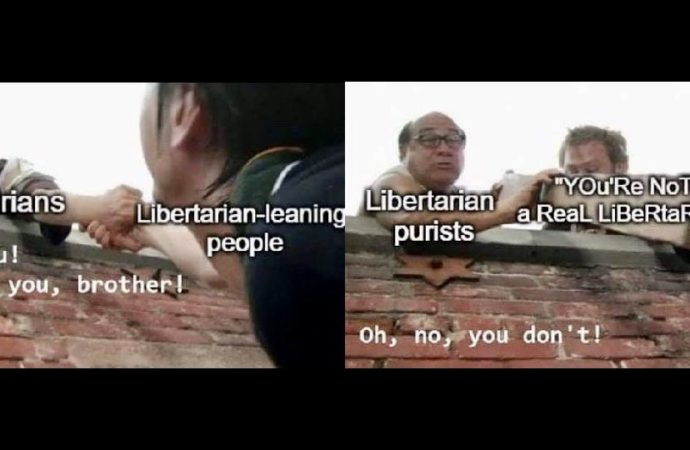 It doesn’t take long browsing libertarian-leaning social media accounts to see the words, “you’re not really a libertarian.” I always imagine a pompous little kid who thinks they’re special just because they got 100% on some online quiz that told them they were a libertarian whenever I read those words.

Gatekeepers can be a real issue in many communities. Religious communities, academic communities, and even gamer communities have gatekeepers that love nothing more than to spoil someone else’s day by making sure that person knows they are not really part of the community. Isn’t it odd that in a community supposedly built on “leaving each other alone”, these types of people exist? The biggest problem with a Libertarian gatekeeper is that the ability to be a gatekeeper requires a definition of what being libertarian means.

Who is anyone to say which one of those is a “real” Libertarian? Their commonality lies in their definitions of “oppression”. Each one feels particularly oppressed in certain ways that spurred them to become libertarians.

Gatekeepers are people who would love to judge all three of these people, and explain exactly which oppression is more legitimate. This creates the massive problem of not being able to recruit new Libertarians. Gatekeepers manage to scare most of the newbies off. That couple that painted their house pink might have even registered Libertarian if the online gatekeepers didn’t convince them that they must be statists since they believe in driver’s licenses. That corporate CEO that started donating to Republicans because Libertarians told him that if he didn’t believe kids should have guns, then he must be a freedom-hating tyrant.

What good does this sort of gatekeeping do? The answer is it doesn’t do any good.

Former New York gubernatorial candidate Larry Sharpe introduced his own way of determining a libertarian with his 80/20 test. He says that if he agrees with 80% of what you say and disagrees with 20%, then he can consider you an ally. For political purposes, this is probably a good idea. When it comes to picking a political candidate, I like this formula. It eliminates the idea that all Libertarians must be the same and must hold extreme libertarian views in order to be a “legitimate” Libertarian politician.

However, this formula fails in a crucial area – recruiting new Libertarians. In my experience running for local office, when knocking on doors and talking to people at events, I hardly met anyone that would consider themselves a libertarian. Upon talking to them, the 80/20 rule certainly would not have worked. Does that mean all these people are a lost cause and should be shooed away from the liberty movement? Certainly not.

My campaign team came up with a unique idea, and it became our greatest strategy. Ever since the signing of the Constitution, there have been people in government seeking to limit the freedoms it grants. Little by little, it has been allowed. Even over the last few decades, my own parents have seen a significant decrease in their liberty. I have heard people metaphorically relate this process of losing freedoms to getting sick. A healthy person first sneezes or coughs a little bit, and then over a week or so their condition deteriorates until they are laying in bed, sick as can be without being able to remember what being healthy feels like.

However, I think this metaphor needs to be taken further. People do not wake up one day magically cured. They start to take medicine and slowly begin to get better. Regaining our liberty must happen the same way.

When I spoke to people during my campaign, most of them didn’t know what libertarianism is, and most of them asked for an explanation. I told them that, if elected as their local legislator, I would force the government to more carefully manage its spending so that we could start lowering the property tax burden. I told them I would fight to remove red light cameras that are unconstitutionally used by our local government. I told them I would fight Albany to deregulate our education so that teachers would have more freedoms in the classroom.

That was it. I didn’t try to force the legalization of heroin into the conversation. I did not shove deregulating tanks and missiles down their throats. I tried my best to convey what I believed core Libertarian values were. Everyone I spoke to supported me. Democrats and Republicans alike listened to my ideas, if only for a few minutes, and considered that they might actually be libertarians.

We as Libertarians are not going to change the world overnight. We are not going to suddenly wake up in a world where everyone is a hardcore Libertarian and our government is brought to justice for its many, many crimes. What we can do is start the change. We start the change by slowly educating people about our ideas and slowly implementing libertarian policies. When those homeowners can paint their house pink because their Libertarian friends helped make change in their local government, they’ll be more open to hearing other libertarian ideas.

So, the next time you want to call out someone who is expressing their belief in the liberty movement but to a lesser extreme than you feel is necessary, consider this. Stop telling people, “You’re not really a libertarian.” Start telling them, “Welcome. We’re libertarians.”