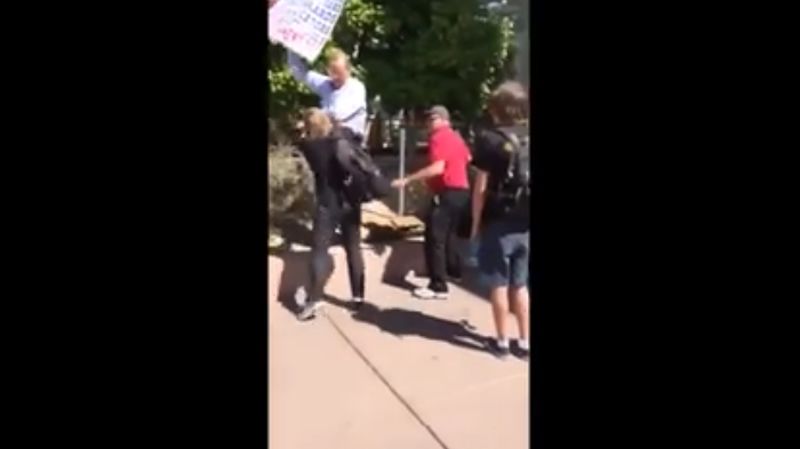 Safe spaces, trigger warnings, and a culture obsessed with political correctness are producing individuals completely incapable of functioning in civil society. These individuals, many college-aged or younger, are being taught to shut down events they don’t agree and to hide away from all opinions that are different than their own.

No longer can we have civil disagreement, because they aren’t interested in discourse. Their aim is rather to shout down anyone who holds a different opinion and then literally work themselves into an emotional fit if they don’t get their way. No longer is academia a place where ideas collide and compete, rather it has become an incubator for self-important grown children who think their feelings are the ultimate guide to truth.

Just look at this video. It’s short, but it is painfully indicative of the current political climate. In it, a “tolerant” liberal student assaults a man for holding a sign he disagrees with. Not only that, but the man-child (I say this because he is old enough to vote yet still throws tantrums like a four-year-old) yells and shrieks at those he disagrees with. To him, the mere fact that he has taken offense is enough for him to justify any action; the fact that his emotions do nothing to stop the man with the sign, only further infuriates him.

There are other opinions in the world and nobody cares about your feelings. Harsh facts this younger generation seems hard pressed to learn. This behavior is indicative of mental illness — working yourself into hysterics because you saw a sign you didn’t like. It’s the same thing when we read countless stories over the past weeks of students reporting to be traumatized by seeing ‘Donald Trump 2016’ written in chalk.

These are the next leaders of the world? We’re doomed.