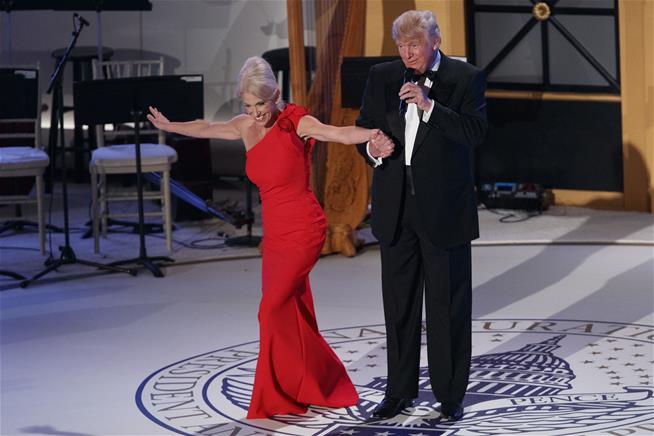 Fox Business host Charles Gasparino has reported that President Donald Trump’s political advisor, KellyAnne Conway, had to take matters into her own hands at the Inaugural Ball, when two tuxedo-clad men started fighting at the inaugural Liberty Ball on Friday night.

“We see a fight between two guys in tuxes and then suddenly out of nowhere” came Conway, “who began throwing some mean punches at one of the guys,” Gasparino wrote in a Facebook post Monday. “Whole thing lasted a few mins no one was hurt except maybe the dude she smacked.”

An attendee tells the New York Daily News that Conway punched one of the men in the face at least three times.

In his Facebook post, Gasparino wrote that earlier in the evening, he had been with Scott Baio outside the Victory Ball when “anarchist thugs began to descend on us screaming ‘hey Chachi are u fascist?'” He says he shoved one of them away and things began to escalate until “producer Brian Schwartz intervened and crisis was averted,” Mediaite reports. Conway spoke to Fox’s Sean Hannity Monday night and she didn’t mention any inaugural fisticuffs, though she did say she now has protection after receiving mail containing a suspicious white powder, which she blames on media coverage of her, the Hill reports. “Because of what the press is doing now to me, I have Secret Service protection,” she said.