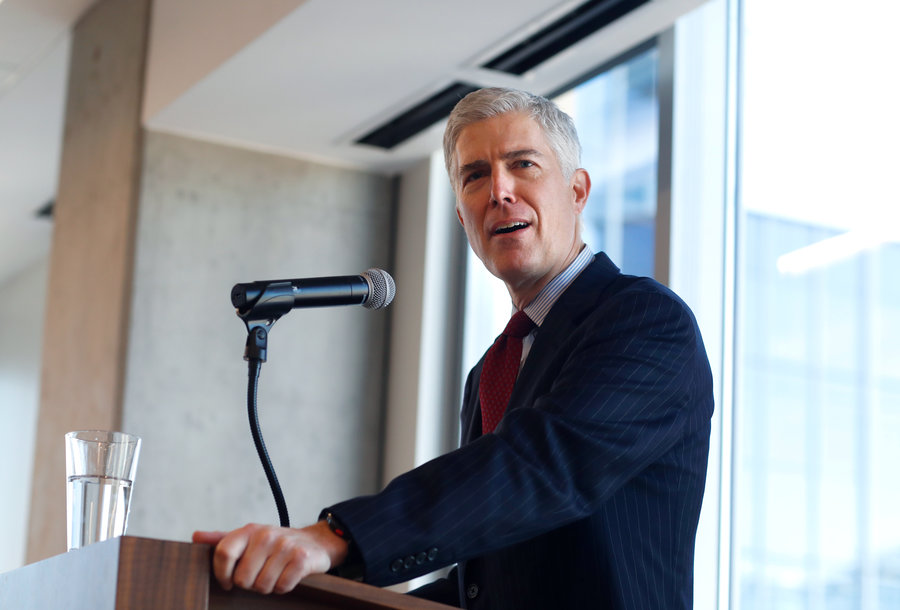 Late Wednesday, Buzzfeed’s Chris Geidner first raised questions about the integrity of two passages in Gorsuch’s book. Shortly thereafter, Politico published its own piece on the same subject, without reference to Geidner’s report. Both posts concerned the same subject and were clearly the product of several days of reporting, suggesting a third party opposed to Gorsuch’s nomination has been shopping this allegation about for some time.

The questions Geidner’s post raises aren’t of the sort that can just be waved away, but hardly justify liberal use of the word plagiarism, as occurred in some quarters late in the evening.

The passages in question concern particular iterations of a highly technical medical phenomenon called “esophageal atresia with tracheoesophageal fistula” as they relate to a case Gorsuch was discussing. The two passages in question do in fact contain citations to two primary sources. However, it appears that Gorsuch drew — in some cases verbatim — from a secondary source which was summarizing the two primary sources he cites.

“Citation plagiarism,” in which a writer includes citations to primary sources without reference to the secondary source where he first encountered them, is a legitimate academic integrity issue. It is fair to report on, and it is fair to question. But in the order of integrity offenses, this is a transgression of the lowest caliber, and there are several reasons to conclude other factors relevant to an evaluation of this issue mitigate strongly in the judge’s favor.

In the first place, the author of the secondary source herself said she does not believe Gorsuch plagiarized from her work, via a statement provided from the White House.

“I have reviewed both passages and do not see an issue here, even though the language is similar,” Kuzma said. “These passages are factual, not analytical in nature, framing both the technical, legal, and medical circumstances of the ‘Baby/Infant Doe’ case that occurred in 1982. Given that these passages both describe the basic facts of the case, it would have been awkward and difficult for Judge Gorsuch to have used different language.”

The author’s acquittal cannot dispositively resolve this issue, but the fact that the primary victim of the alleged-violation has sided with Gorsuch cannot simply be set aside.

One might reasonably argue that Gorsuch misleads the reader when he does not thoroughly document his sources, or leaves the reader with the false impression he has reviewed particular primary sources. Fair enough. But we might also ask about the extent to which the reasonable reader would assume or should expect that Gorsuch has command of expert medical knowledge. His reliance, indeed dependence, on scientific authorities in sections of the book pertaining to complex medical phenomena would surprise no reader. If neither the author nor the reader feels aggrieved, who is the victim of the alleged violation?

This is not to say that inaccurate, misleading, or dishonest citation practices are harmless in the absence of a victim, but they cannot be placed in the order of offenses that actually effect others. This captures how draconian plagiarism conventions have become, as professor Sam Bagenstos of the University of Michigan Law School explained. Sloppy banal exposition, as he puts it, does not belong in the same category as the wholesale appropriation of another’s ideas, research, or creative verve — but our integrity nomenclature increasingly conflates these two offenses, and so does the disciplinary architecture erected around it in higher education and in media. As Bagenstos puts it, one is a foul, the other is a felony.

In the second place, the relevant portions concern precise medical jargon. Though Geidner points out other scholars have effectively summarized these sources on their own terms with proper citations, the number of ways one might describe “esophageal atresia with tracheoesophageal fistula” as it is relevant to a particular set of facts is surely very small, which Kuzma herself points out.

That an anonymous third party appears to have been pushing this allegation to several media outlets just days before his confirmation vote is also relevant. It is safe to assume that the party who first flagged this violation has thoroughly scrutinized Gorsuch’s book. On finding one instance of plagiarism, a good opposition researcher would go in search of others, in the book itself or in his opinions for the 10th U.S. Circuit Court of Appeals. That this is the only allegation they could muster strongly suggests the other 199 pages of a 320 page book survived the study of hostile eyes.

In that vein, we should also wonder if Democratic staff on the Senate Committee on the Judiciary reviewed Gorsuch’s book for plagiarism. Though the book did not feature prominently in the confirmation hearings — for reasons passing understanding — a review for plagiarism would be the obvious first step for a minority party. Assuming such a review of the book took place, and given these allegations were not raised during the hearing, we could safely conclude Democratic staff did not notice the citation issue. This is not exculpatory, but it further reinforces the negligibility of the offense.

Democratic staff on the Judiciary Committee did not respond to The Daily Caller News Foundation’s inquiries by press time.

Perhaps the most surprising fact of the story is that this eleventh hour barb is the first time his book, concerning a highly charged moral question, has received any protracted attention whatever. The allegation borders on pettifogging, but it’s relevant. Why has it only just been discovered?