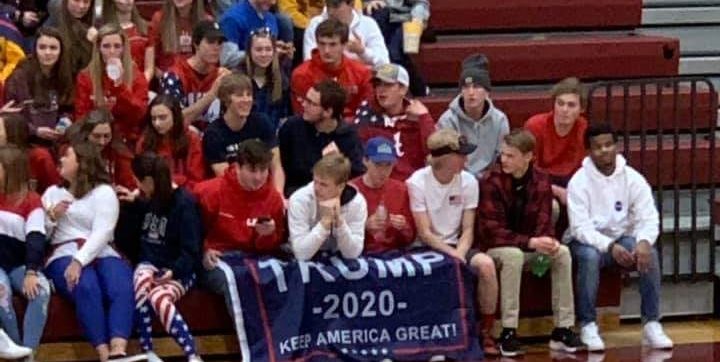 MINNESOTA – A high school basketball team has pulled out of a basketball tournament scheduled for Martin Luther King Jr. Day. Their reasoning? Following a game a few days ago, Jordan High School’s fans were criticized heavily for showing off a ‘Trump 2020’ banner during a game. Their opponent’s head coach, Michael Walker, posted the following on Facebook:

“I coach a predominantly black inner city high school team. We go out to a rural area in Jordan, MN and this is there. Please explain how and why this is appropriate at a high school basketball game?”

Bridget Kahn – the Jordan, MN parent who claims to own the flag, said it was shown off in part for the school’s black-out night. She said they were simply “supporting their president” and “[they] don’t have a racist bone in their body.” She also mentioned to the Tribune that the Roosevelt team visiting

The Jordan superintendent felt differently on the matter and had this to say:

“[District officials] regret that Roosevelt players and their coaching staff, fans and community were made to feel uncomfortable, as it is always our intent to graciously host our opponents,” said superintendent Matt Helgerson, according to the Tribune. “[The district is] reviewing this matter and collecting information [and] working cooperatively with the Minneapolis School District and Roosevelt High School in our review and response to this event.”

On Sunday, Jordan officials made the announcement that the school would not participate in the “MLK Showcase” game. Helgerson said that he did not want his team’s presence to ‘detract from the athletes.’