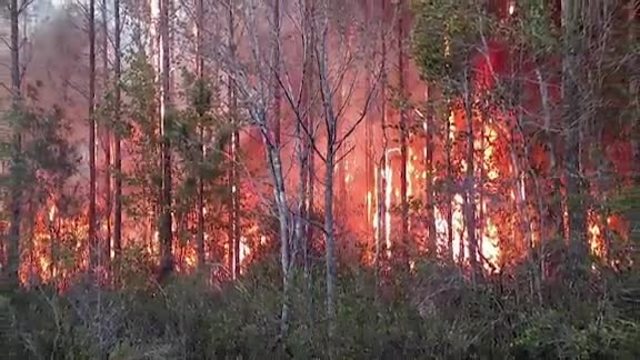 A book-burning party turned dangerous and took out at least 10 houses in Florida Wednesday, forcing 150 people to evacuate.

The wildfire, which authorities are calling the Garfield Road fire, burned nearly 400 acres, and the fire department announced that it was 65 percent contained Thursday morning, local station News 4 JAX reports.

The fire started around 2 p.m. Wednesday when a man started burning paperback books. As the wind picked up, the fire got away from the man and he could no longer control the bonfire.

A neighbor called 911 as the fire began to spread to other homes. “It’s burning everything,” the caller told the 911 dispatcher, News 4 reported.

“He can’t get the hose to reach. Oh my God. It’s burning down dead grass toward other people. He shouldn’t have been doing what he was doing. The damn woods are on fire, now,” the caller said.

Our thoughts and prayers to those displaced by this fire. An experience that I will never forget. Life is more precious than any property. pic.twitter.com/zaxfjNlCgC

It’s unclear why the man was burning the books, but the Florida Forest Service reminded everyone that burning “garbage” is illegal in Florida.

#GarfieldRoadFire was caused by someone burning paperback books off CR121 in Nassau County. Burning household garbage is illegal in Florida

“It was an illegal burn,” Annaleasa Winter, a spokeswoman for the Florida Forest Service, said according to CNN. “It was paper. It got away from him.”