AUSTIN, TX – At one of the most anticipated events at SXSW, Edward Snowden, NSA whistleblower/hero held a video conference at 11 a.m. yesterday. The cavernous conference hall was similar to a Ted Talk, with everyone looking anxiously towards the stage. Christopher Soghoian, principal technologist of the American Civil Liberties Union, and Ben Wizner, the director of the ACLU’s Speech, Privacy & Technology Project and Snowden’s legal advisor, eventually wandered onto the stage.

“Well, since you didn’t applaud when we came on stage, I’m guessing you’re here to see someone else,” Wizner joked to applause. I’ve felt similar anticipation at rock shows.

The man of the hour arrived, the Constitution fittingly superimposed behind him. Snowden looked healthy, but we were told that technical difficulties would inevitably happen with Edward using seven proxies. Despite that, his message was still able to ring out loud and clear to an audience hanging on his every word. 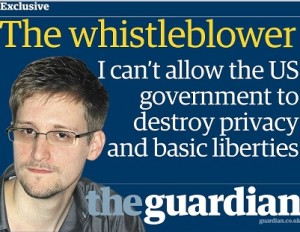 “You’re joining us for the event that one member of Congress from the great state of Kansas hoped would not occur.” Wizner began, referencing Mike Pompeo’s letter. “He wrote to the organizers of SXSW urging them to rescind the invitation to Mr. Snowden. The letter included this very curious line: ‘The ACLU would surely concede that freedom of expression for Mr. Snowden has declined since he departed American soil.’ No one disputes that freedom of expression is stronger here than there, but if there is one person for whom that is not true, it’s Edward Snowden.” Pompeo was the only Kansas congressman to vote against Justin Amash’s proposal to curtail NSA surveillance.

Wizner’s proclamation incited cheers as he went on to elaborate that without Russian asylum, Snowden would be in a cell, and unable to participate in the debate he helped to start.

The debate itself  did not center on legislation that would reign in NSA spying. In technology companies, the debate is about encryption, and why the NSA is undermining and hacking technology companies. This is why Edward Snowden chose to grace SXSW with his digital presence. “They’re setting fire to the future of the internet, and the people that are in this room now, you guys are the firefighters.”

The technology community states that the protection encryption would provide should be innovated so the average consumer can protect themselves. For someone as non-tech savvy as myself, this was a particular point of interest. Our apps and services are not as secure as they could be, since security is more of an after thought, “if it’s a thought at all.” In today’s climate, developers should rethink how they design a product, and make security a priority in the early process, so that tech newbs like myself can have more options in terms of privacy. Snowden believes enforcing protections in a single, cheap, and effective way that’s invisible to users is the answer.

Part of Snowden’s written testimony last week to the European Parliament outlined a plan that exploited the weaknesses of mass surveillance. Changes in technical standards could make it much more expensive for government agencies like the NSA to conduct mass surveillance.

Edward went on to say that the primary challenge to mass surveillance is encryption. Our government circumvents encryption with the key escrow method. Companies like Google and Facebook currently hold the keys needed to decrypt encrypted data in escrow, so that, under certain circumstances, an authorized third party may gain access to those keys. Our government is such a third party.

Snowden’s solution involves more constitutional enforcement. If the government wants to gather someone’s communications, they need to target them specifically, not collect data on everyone in the hopes they’ll find something useful to blackmail them with later.

The NSA stores your data for years for this exact purpose. Snowden was a victim of this very thing himself when the NSA used information they’d gathered from 2010 against him.

Bypassing these systems are complicated for those of us who rely on businesses like Google, whose business model in turn relies on collecting data to serve us targeted ads. New business models where security becomes a financial incentive for tech companies are necessary. This is where the conversation got a bit awkward, as Google hangouts was the method of communication the conference was using.

“The irony that we are using Google hangouts to talk to Ed Snowden is not lost on me. Let’s be clear,” said Soghoian to laughter. For all its other flaws, Google simply works the best. If the free market chooses programs that will protect their privacy over systems that are simple to use, then invasive programs like Google would weaken. Yet programs to protect our privacy (TOR and PGP) are not easy to use or install. The call to arms for people in technology is to make encryption more usable.

For Snowden’s part, he believes progress is being made. Until recently, Google hid the option for Secure Sockets Layer (SSL), which provides users with a more private and secure experience. The SSL option was the 13th out of 13 advanced options. Now, it’s finally been turned on by default and enabled without users having to take any advanced steps. A small victory, but a victory nonetheless. Ultimately, Soghoian believes that truly secure and usable programs will have to be paid for, but he thinks the amount could be minimal at $5 a month.

After Snowden answered a few Twitter questions, he left the conference on a high note. Wizner asked Snowden if he would do what he’s done again. “Absolutely yes. I took an oath to support and defend the Constitution and I saw the Constitution … being violated on a massive scale,” Snowden said to a standing ovation. Being among the crowd to cheer for Snowden made me feel like more of a patriot than I have in a long time. The tides are turning, and their powers are eroding.