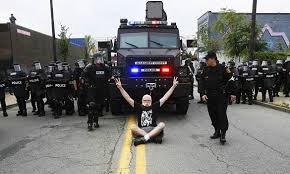 Representative Hank Johnson (D-Ga.) recently introduced legislation to restrict the 1033 Program that allows the Pentagon to transfer surplus military equipment to local police departments. This bill arose in light of last year’s Ferguson controversy, which has raised many concerns on the militarization of police forces. The bill was originally introduced in the past congress, but it did not pick up enough momentum to merit legislative action.

In times when the Democrat Party has been expanding the government at astounding rates (as it has always done for that matter), this bill is a breath of fresh air. Military equipment has no place on our streets, especially in the hands of a monopolized law enforcement apparatus that has shown a penchant for abusing its power. The Founding Father’s worst nightmare of a veritable standing army has been a reality for some time, as many police departments have embraced militarization and have effectively become local appendages of the military-industrial complex.

The militarization of police is merely a microcosm of the over-arching trend of statism that has plagued the United States for the past century. “Trickle-Down Statism”, if you will, these top-down policies have effectively seeped down to the local level. What once were local institutions that served as checks to the federal government, now many cities and states have kowtowed to the federal government over in exchange for a treasure trove of federal goodies and benefits.

The origins of the militarized police first began with the development of SWAT (Special Weapons And Tactics) teams in the late 1960s and the early 1970s. With time, the launch of the Drug War helped consolidate this trend and effectively give law enforcement the necessary pretext to militarize. The Military Cooperation with Civilian Law Enforcement Agencies Act that was enacted in 1981 enabled the military to cooperate with law enforcement in matters of combatting drug trafficking and terrorism.

Consequently, militarization of law enforcement had then become institutionalized and was part of everyday life. But it didn’t stop there. In 1997, the NDAA (National Defense Authorization Act) created the aforementioned 1033 Program that only augmented the previous militarization policies. Right after 9/11, the enactment of the 2001 PATRIOT Act provided law enforcement officers the power to search a home or business without the owner’s or the occupant’s consent or knowledge.

As if it weren’t enough, the creation of the DHS (Department of Homeland Security) in 2003 has created a massive piggy bank of federal grants for police departments to take money out of. Estimates indicate that over $34 billion in federal grants have been allocated to police departments from 2001 to 2011. As expected, these grants were justified under the pretext of counterterrorism.

What is very clear in this history is the ever-growing nature of the State. When one piece of legislation or a bureaucracy is expanded, it only keeps gets bigger and bigger further down the line. That is ultimately the nature of the State. No matter how oppressive or how disappointing a bureaucracy’s performance is, it will continue to expand given its monopolistic power and its privilege of being free from outside competition.

In short, the Drug War should be ended, the DEA should be abolished; alongside with the DHS. But we shouldn’t stop there. The root of the problem is ultimately government involvement in the law enforcement sector. With the rise of private security and an armed citizenry that is capable of defending itself, it’s time to rethink the role that government should play in the provision of law enforcement services. There have been numerous occasions in US history, such as the so-called Wild West, where state law enforcement agencies were very small or virtually non-existent.

With the State becoming more and more obsolete in the 21st century, it’s only natural to trust the one process that has constantly delivered for mankind: the free market.

The Interesting History Behind the Statue of Liberty