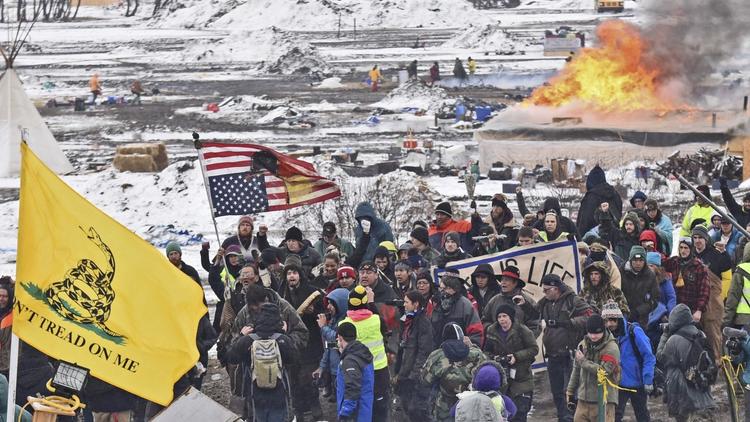 by CHRIS WHITE
Only a handful of stragglers remain at campsites in North Dakota set up for activists protesting the Dakota Access Pipeline.

Gov. Doug Burgum, a Republican, said during a news conference Wednesday there are only 25 to 50 protesters left at the Riverside campsite.

He said the anti-DAPL activists were still free to leave if they don’t interfere with sanitation crews scheduled to enter the site at 9 a.m. Thursday.

“We’ve very firm that the camp is now closed,” Burgum said at the news conference.

Opposition to the pipeline died down shortly after the Obama administration rejected the hotly contested pipeline route – but DAPL opponents were reenergized after President Donald Trump overturned his predecessor’s order.

Standing Rock activists say law enforcement officials should expect a fight from those remaining at the site.

“I feel as though now is the time to stand our ground,” said Alethea Phillips, a demonstrator who spent three months at the camp.

Iron Eyes made more bombastic comments the day of the deadline.

“Everybody plans to be in camp tomorrow up until the 2 o’clock mark. Then people will make their individual decisions about what their level of commitment is,” Chase Iron Eyes, a member of the Standing Rock Sioux Tribe, told reporters. “Some will get arrested.”

US Marines Raised The Flag On Iwo Jima 72 Years Ago