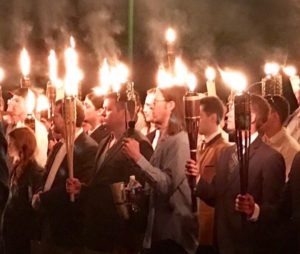 Like most Americans, I was absolutely horrified by the violence, hubris and utter chaos that unfolded at a White nationalist protest in Virginia this past weekend. Specifically, I am referencing the “Unite the Right” rally in Charlottesville that attracted Neo-Nazis, white nationalists, white supremacists, and other far-right nationalist groups on August 11 and 12.

These virulent racists came to Charlottesville under the pretense of protesting the removal of Confederate monuments and memorials from public spaces and in particular, the proposed removal of a sculpture commemorating the late confederate general Robert E. Lee.

In response to this gathering of white nationalists and other racists, hundreds of counter protesters showed up, including the equally violent militant leftist group known as “Antifa.” Predictably, several violent scrimmages ensued between the initial protestors and counter-protesters. Tragically, one of the white nationalist protesters with alleged pro-Nazi sympathies committed vehicular homicide when he used his car to plow into a group of counter-protesters.

This act of despicable rage killed one woman and injured 19 other people, including five people who remain in critical condition. in a separate incident, two Virginia state troopers were killed seven miles southwest of Charlottesville when their police helicopter crashed while they were monitoring the simmering cauldron of rage and hostility that was unfolding beneath them.

As a life-long conservative and Libertarian, I am both appalled and angered at these series of events and while I believe in these groups First Amendment right to freedom of speech, these racist  groups are not benefiting the cause of conservatism in America today.

On the contrary, racism and hatred should have no place in the public arena today. We conservatives who truly love America and want to see the best of constitutional democracy preserved in the United States, need to disavow and repel these white nationalists from American conservatism immediately. We conservatives need to follow the example of the late great media pundit William F. Buckley Jr., who spent a considerable portion of his time as a public intellectual, expunging racists and other lunatics from the American conservative movement.

The American people need to understand that not all conservatives are racists or part of the white nationalist movement. There are many conservatives in this country, including myself that oppose racism and discrimination with unfashionable vehemence. If we conservatives do not do a better job at purging and distancing ourselves from these white nationalists, we run the risk of being delegitimized in the broader American culture forever.

For Immediate Release: Presidential Statement on the Events in Charlottesville − as they should have been given

‘Map Of Death’: North Korea Has A Detailed Plan To Incinerate Guam