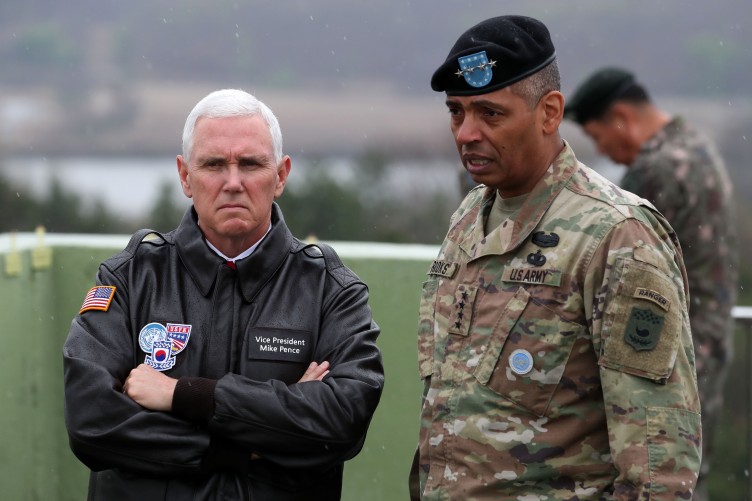 Vice President Mike Pence has stressed the strength of America’s resolve in his trip to Asia.

While in South Korea, the vice president broke from his schedule to visit the demilitarized zone (DMZ). While past officials have visited DMZ, Pence ventured outside the Freedom House to stare down the North Koreans. He revealed that this was done intentionally to send a message to North Korea.

“I thought it was important that people on the other side of the DMZ see our resolve in my face,” Pence told the Washington Post Wednesday.

Pence issued multiple warnings to North Korea, which has conducted multiple missile tests in recent weeks, during his time in East Asia.

“Just in the past two weeks, the world witnessed the strength and resolve of our new president in actions taken in Syria and Afghanistan,” Pence said in South Korea. “North Korea would do well not to test his resolve — or the strength of the armed forces of the United States in this region.”

“North Korea is the most dangerous and urgent threat to peace and security in the Asia-Pacific,” the vice president said, standing on the deck of the Nimitz-class aircraft carrier USS Ronald Reagan presently stationed at Yokosuka Naval Base in Tokyo Bay, Japan.

“The United States of America will always seek peace but under President Trump, the shield stands guard and the sword stands ready,” Pence added. “Those who would challenge our resolve or readiness should know, we will defeat any attack and meet any use of conventional or nuclear weapons with an overwhelming and effective American response.”

North Korea’s Rodong Sinmun, the paper of the ruling party, wrote Thursday that the country stands ready to launch a “super-mighty preemptive strike” against U.S. bases and the mainland, promising to “reduce them to ashes.” The paper also said North Korea would “wipe out” U.S. forces.

US Navy Designing New Submarines With Women In Mind