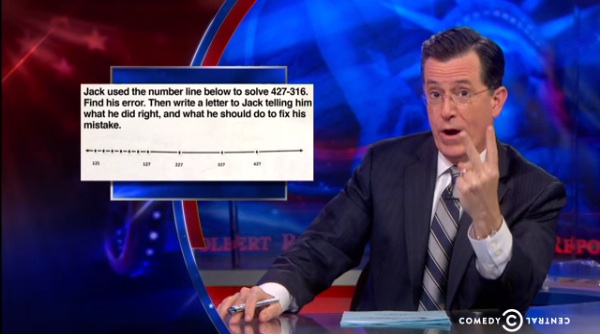 In case you missed this recent episode of The Colbert Report, we’ve got the highlights covered. Stephen Colbert let fly at some of the more ridiculous Common Core math problems that have been frustrating parents, teachers and students.

He opened the segment with a quip about how, “Common Core testing prepares students for what they will face as adults: pointless stress and confusion.”

States have been resisting this forced curriculum in whatever way possible, including delayed implementation and outright rejecting the highly criticized standards. The entire Common Core program centers around intense standardized testing that have left some students in tears.

Colbert sarcastically commented that of course tests are stressful, and went into detail about viral Common Core math problems that highlighted just how ridiculous they are. The questions are poorly worded and force children into doublethink.

An example provided by Colbert is a simple addition problem, with a twist. “Write a number sentence with a blank for the missing number. Explain how the number sentence shows the problem.”

Said Colbert, “If you don’t know what a number sentence is, you could use a word equation or formula paragraph.”

A real second grader’s response to the question is even better than Colbert’s witticisms.

“I got the answer by talking in my brain, and agreed of the answer that my brain got.”

Maybe our children will turn out alright.

Advocate for Muslim women denied honorary degree for being “Islamaphobic”