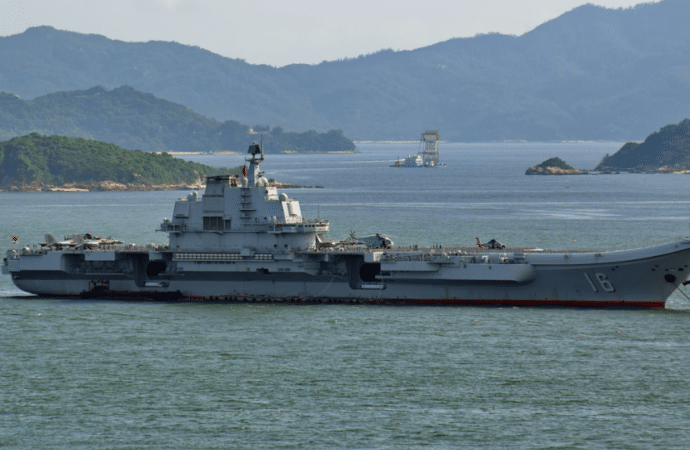 The People’s Republic of China this week officially became a producer of aircraft carriers.

It’s a stark reminder that this is a competitive world when it comes to pursuit of national interests. The U.S. has to keep up with development of its own Navy.

Even with the major commitment by the Trump administration over the past three years to restore funding, the Navy’s plans and readiness are in constant jeopardy because of squabbles in Washington.

Although the Shandong appears to be based upon the Liaoning (which Beijing purchased from Ukraine), the Chinese also apparently are working on a larger, even more capable carrier, expected to enter service in the early 2020s.

The Shandong and Liaoning use a “ski jump” to help aircraft take off, limiting the weapons and fuel loads. The new carrier will be more like American aircraft carriers, using catapults to launch aircraft.

The Shandong is emblematic of the growing capabilities of China’s navy. Chinese shipbuilders have been producing a range of modern combatants, from the Type 052D destroyer, comparable to the American Arleigh Burke-class, to frigates and corvettes that are far better armed than the American littoral combat ship.

Indeed, the average age of ships in China’s navy has been steadily decreasing, as these new combatants enter service in growing numbers and replace older vessels.

These ships are showing China’s flags across the seven seas. Chinese navy ships regularly visit neighboring ports and undertake cruises deep into the central Pacific. China has conducted anti-piracy patrols off the Gulf of Aden for more than a decade, rotating forces every four months.

Even more noteworthy, Chinese naval forces have conducted exercises in the Baltic and Mediterranean for the first time. China’s first official overseas military base has been established in Djibouti, ostensibly to support Chinese naval operations in the Indian Ocean.

The introduction of the Shandong underscores the determination of the Chinese to field a modern, blue-water fleet. The Liaoning’s operations already have shown that China recognizes that aircraft carrier operations involve not only a flattop, but also escorts, an operational air wing, and underway replenishment capabilities.

Chinese naval exercises with the Liaoning have incorporated all of these elements. Indeed, China’s naval modernization has included not only an array of modern surface combatants, but multiple submarine classes and various fleet support ships to allow sustained operations away from port.

Just as important, the Chinese fleet often has advanced far faster than expected.

As Vice Adm. David Dorsett, then head of the Office of Naval Intelligence, observed as far back as 2011, the U.S. has “been pretty consistent in underestimating the delivery and [initial operational capability] of Chinese technology, weapon systems.”

Some Western analysts had predicted the Chinese would take years to develop the skill to launch and land from an underway carrier, yet the Chinese were doing so by 2014. (Other observers thought that the carrier was actually intended to be transformed into a casino.)

The entry of the Shandong into service hopefully will lead to a more realistic assessment of the Chinese naval-modernization effort.

Throughout its millennia of existence, China has been a continental power—that is, a nation mainly focused on land power.

Although there were moments of Chinese focus on maritime exploration and capability (the 15th-century “treasure fleets” of Adm. Zheng He being perhaps the most famous), naval development was rarely sustained. Indeed, when the treasure fleets returned for the last time in 1433, the Chinese court had the ships and plans destroyed.

President Xi Jinping’s China, however, is unique. As a net importer of both food and energy, China is dependent upon the world’s sea lanes, not only for moving its exports to market but also for the fuel and food that sustains it.

Consequently, China’s navy is not a discretionary capability, as was the case with past land powers, such as Napoleonic France, Wilhelmine Germany, or Soviet Russia, but an essential part of China’s strategic security.

Moreover, China’s economic center of gravity is now on the coast, rather than far inland. It must secure the belt of industrial parks, research facilities, and even space-launch centers (on Hainan island) from maritime threats.

The Chinese air force and navy, rather than the army, now occupy central roles in underwriting Chinese security.

U.S. decision-makers should, therefore, recognize that China’s naval capabilities will continue to grow for the foreseeable future and will pose a substantial challenge to both the United States and its allies in the coming years. They must look ahead and prepare for the worst if they are to successfully avoid it.