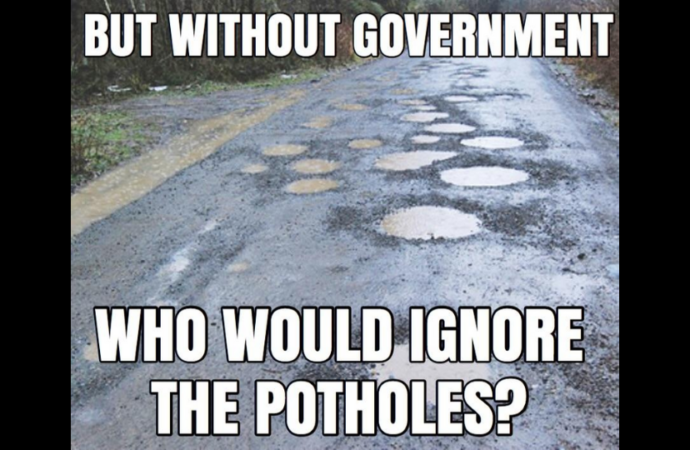 Just yesterday, I was scrolling through Twitter and came across six separate tweets relating to the Libertarian perspective on government, particularly about what would be the “lack of funding” in a governmentless society. All six were criticizing the idea that our already failing infrastructure could be managed by anyone less than our current government system. When trying to debunk Libertarian theory, statists often mention infrastructure and highways, yet fail to see the fallacies in their argument. It is not complex nor complicated, yet here we are.

When I say “government”, I am talking about the forcible entity in which a series of officials are ‘elected’ to rule over a group of people and use said people’s finances in order to “maintain” systems such as defense, infrastructure, etc. I am not talking about a private entity or a private group voluntarily formed for the betterment of a community.

Who Would Pay for Infrastructure?

Business would most likely be the largest contributor to the cost of our roadways/infrastructure. While they wouldn’t be coerced into “paying their fair share” through taxes, they would be pushed to contribute through the laws of economics and business. In order to sell their goods, they must have customers, and they must have a supplier. In order to reach their supplier and customers, some degree of infrastructure is highly necessary, otherwise no money is made.

In fact, businesses initially paid for much of our current railroad system, as private companies built them and maintained them. There would be many incentives to have infrastructure from a logistical standpoint, so why wouldn’t businesses contribute?

In the business world, your company either sells a service or supplies those businesses with the essential tools needed to sell a service. In order to sell a service, you have to have the supplies required. Such supplies are made and transported by outside companies that manufacture products for businesses, and those supplies are also delivered via infrastructure. That is why Libertarian theory also mentions the suppliers in the chain of payment to private industry. Companies like UPS, FedEx, DHL and many more would all have to contribute in order to make a profit and sell their services.

Do you like buying new clothes or shoes? Do you have private insurance? Do you like ordering pizza? If you do, then you understand that someone has to sell those. Typically, salesmen work for a much larger operation than just themselves, but every so often, they are part of a small-scale business. Either way, they have to move their product, so sales people would be more likely to contribute an amount, however small compared to larger corporations.

Indirectly, tourists would pay for a small portion of the infrastructure through the costs of traveling and expenditures. Sure, that money would come directly from the business, but where did the businesses get their funds? From the tourists, who also need some source of infrastructure in order to travel from place-to-place.

While the business world requires infrastructure through profit-motive, the everyday person will have to contribute in order to live their lives appropriately and comfortably. We use roads every day, whether it be for traveling to work, getting groceries, going shopping and so much more. In order for the common people to pay their share voluntarily, there could be sources such as GoFundMe or Kickstarter.com that allow someone to do the math on a project and its cost, and consumers could join those groups to pay a specific portion to ensure that the infrastructure is cared for and built appropriately.

Why Would Private Companies Want to Build Infrastructure?

Private companies would have many incentives to build, maintain, and repair our roads and infrastructure. To start, it is highly profitable. For our failing system, billions of dollars are expedited every year. Construction and base companies could make major amounts of money from building bridges, buildings, roads, etc.

Next, private companies would be held accountable by the consumer, who pays and uses the roads, to keep the infrastructure maintained and repaired as needed. Currently, this is where our government falls the shortest in the infrastructure category. You can hardly drive anywhere without seeing potholes, cracks, and other broken aspects of our highways, despite there being constant construction. If you switch over to the railways, private companies almost always uphold their rails, and keep them in the most usable shape possible. That is because of accountability.

If the people are happy, they will keep paying for roads to be placed, maintained, and repaired, so that itself should be enough of an incentive.

Otherwise, there would be no money going to the roads and companies/businessmen in charge of building such systems would go bankrupt.

The Advantages of a Private Infrastructure System

In a privatized, free market system without a coercive government in place, our infrastructure will be cleaner, safer, and more efficient than our current system. This is because the owners of the road would have their own self-interest at heart, along with profit-motive.

Why, though? Because of economic competition and financial motivation. If Company A has a reputation for having the highest-quality, safest roads, then they will be making more of a profit than Company B, who makes roads that aren’t as dependable. If Company B wants to catch up with A, they will have to invest more time, money, and effort into their systems. If there are roads that are entirely unsafe, then you can simply not use them and they lose money, along with popularity.

Privatizing infrastructure would also introduce new technology, similar to some things used by private businesses. You could have apps like ‘Yelp’, ‘TripAdvisor’, and much more.

While most people cannot imagine a society without a gun to your head, it is not as complicated as it may seem. It just comes down to whether or not you want to cut out the middleman and keep asking yourself, “But Muh Roads?”