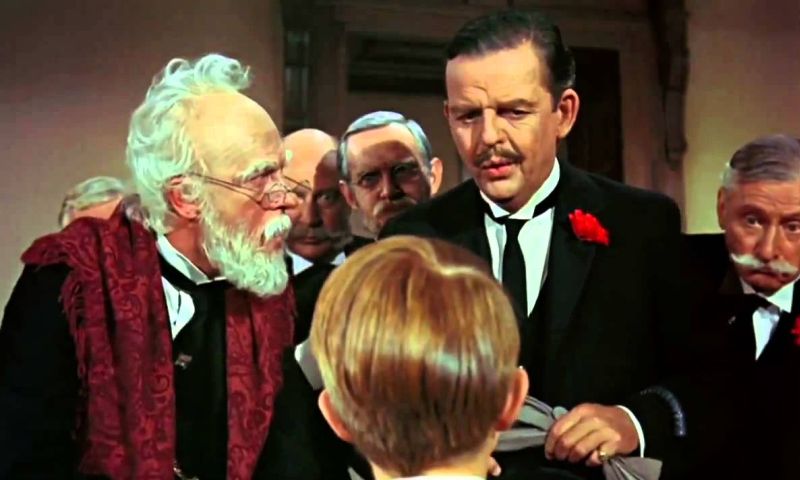 When people deposit money in the bank, there is often this notion that a real bank is like a piggy bank into which we put our coins in order to save them against the day that they will be of use to us. But in fact, we are lending the money to the bank and our money is anywhere but in that bank to which we lend it. Because, no sooner have we lent it, the bank turns around and lends the same money to someone else, only at a higher interest rate.

In case you have trouble imagining how it works, there are a number of movies that explain it vividly, using song and dance and very graphic dramatizations. Some of our favorite feel-good movies feature a run on the bank.

Mary Poppins: How the Banks Children Saw the Bank

In the classic Disney version of Mary Poppins, depositing money in the bank is described as “investing.” Investing implies that the money is indeed at risk, but that the person investing it stands to gain if the investment goes well. There is little pretense that the tuppence is not at risk, despite the assurance that it will be invested “safely” and that money in the bank is “safe and sound.”

Michael Banks wants to feed the birds. The bank staff try to fire his imagination by telling him all that his tuppence could do, if only invested in the bank. “Railways through Africa; dams across the Nile; Plantations of ripening tea.” It all sound very romantic, and it implies that the money will be used in the real world by heroic people who are creating valuable products. New wealth will blossom from old money.

Yes, I know, those plantations of ripening tea were in some colony or other, and that whole “Empire thing” is not politically correct. The important point to be made here is that in order for Michael Banks to receive his interest — and to have the capital return to him safe and sound — people in the real world have to work hard to create real value.

Michael is not convinced by the sales pitch, and his insistence that he be given the tuppence back triggers a run on the bank. So what is a run on the bank? It’s when everyone asks for their money back at the same time, and the money isn’t there waiting for them. It’s out in the real world, being used by someone else.

A different scenario is explained in the following scene from It’s a Wonderful Life.

In this American version of a run on a savings and loan, there is no pretense that the money is being used productively to create new wealth by the borrowers. The borrowers are using the lenders’ money to finance their homes. This is borrowing for the purpose of consumption — not production. And who are the lenders? They are the same sorts of people as the borrowers are. They are people who want to save money and deposit it in the bank, in return for interest. The bank charges the borrowers a higher interest rate than it pays the lenders. So in effect people are lending money to their neighbors and borrowing money from their neighbors, and the savings and loan is just a middle man.

Okay, so no bad guys, right? Just neighborly people helping each other out. Nobody actually produces anything here using the extra money, but nobody is being exploited, either. Except, what exactly is the role of Old Man Potter?

He appears to be someone who lends money to other people in the hopes that they won’t be able to pay him back. This stock villain is represented to very good effect in the following Dudley-Do-Right cartoon. This time, his name is not Potter — it’s Whiplash!

When I was a little girl, I used to hold my breath watching this cartoon, waiting for the Inspector to explain to Dudley that there are two sides to the story, and precisely why it’s okay for Snidely Whiplash to foreclose on mortgages. Alas, the explanation was not forthcoming, because the media was awash with antipathy for money lenders. Okay, maybe I’m overstating my case, because this is a pretty amusing cartoon and hardly Marxist propaganda. But you couldn’t turn on the TV without seeing some bad guy either evicting tenants who hadn’t paid their rent or foreclosing on the mortgages that widows and orphans were behind on.

With this this kind of public attitude, who wants to be a money lender? No one. So everyone, no matter how flush they were with money, decided to borrow instead. Even Snidely Whiplash.

Instead of buying a home with the cash they had on hand, people would use the cash as a down payment on the nicest home they could get a loan for. When they got a raise, instead of using the extra income to pay off the loan, they negotiated their equity into a down payment on an even more expensive house.

We became a nation of borrowers. But who were the lenders? They were still the people who had money deposited in the bank. They were still us. They were the neighbors who lived more modestly in hopes of getting a return on their investment in the bank– only there were fewer and fewer of them, and instead of financing railways through Africa or dams across the Nile — they were just banking on their neighbors’ ability to pay back the mortgage.

When all the rhetoric dies down, it is not about us versus them. It’s us versus us. We’re all in this together, and we can’t expect to make a living by lending each other money. Somebody has got to go out there and make something real! So ask your bank what it’s doing with the money in your savings account, and what it plans to index your money to in order to keep up with inflation. If they are not building dams across the Nile, maybe it’s time to withdraw your funds and find something else to invest in.