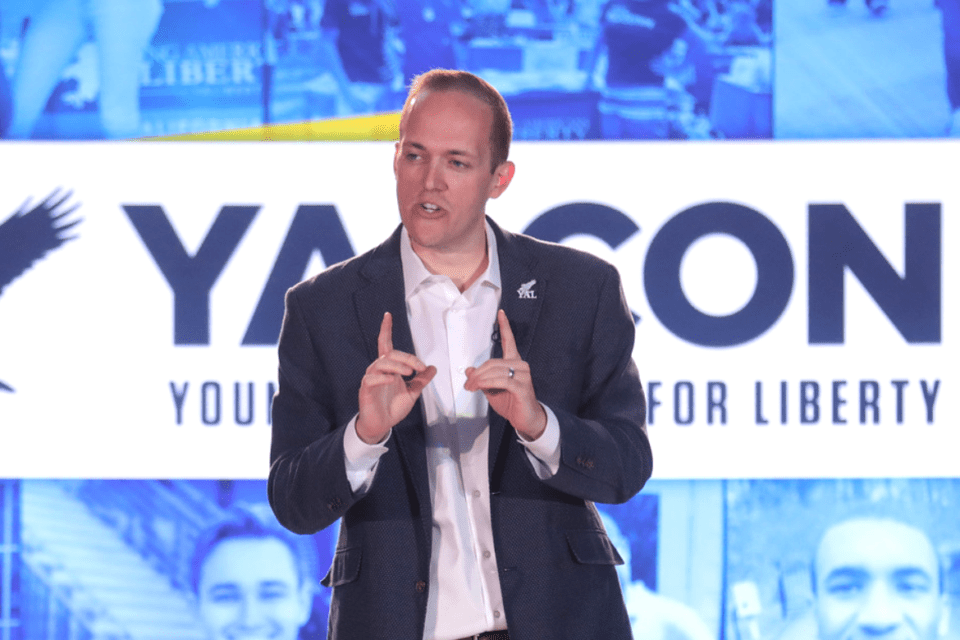 Over the weekend, several women came forward on social media, accusing Young Americans for Liberty of ignoring or mishandling claims of sexual harassment against YAL president Cliff Maloney and others in the leadership staff. Addyson Garner, who worked for the college campus liberty activist organization from late 2018 through mid-2019, first posted about her experience with YAL and Cliff Maloney on Facebook. Later on Twitter, she shared the same information and encouraged others to tell their stories, using the hashtag #YALtoo.

Her tweet spread quickly, with several women relating similar experiences of reporting harassment incidents they say were handled inappropriately if at all. One of the common themes reiterated was that this was not an uncommon issue among liberty organizations. One woman tweeted, “reading through #YALtoo is difficult because it has resurfaced my negative experiences with TPUSA, but I’m disturbed that liberty organizations have continued to systemically fail to believe and protect young women. it’s an egregious, unacceptable failure.” Many people expressed their appreciation for YAL, but said that what was being reported has been an open secret for years.

This is BRAZEN behavior by YAL leadership– more disgusting than I thought possible@LibertyGreiss VP at @YALiberty #YALtoo pic.twitter.com/fJOHDPmt0u

Taylor Hall was one of the women referenced in Garner’s original post. Saturday morning, she came forward detailing an incident with Cliff Maloney at a YAL Convention in 2017. She reported that after asking her to bring food to his room, “He lectured me about loyalty to him, and that people who aren’t loyal to him “don’t stick around long” in the organization, before asking me to come get in bed with him.” She then went on to relate how she had reported the incident to multiple people in leadership, including YAL founder and former president Jeff Frazee. She continued working for the organization with the assurance of an investigation, but said there was no resolution. Since that time, she says she has continued to hear more stories and that there are pending lawsuits. In her post, she also included screenshots of texts with Maloney, which she says are in reference to the incident.

As word spread, many began calling for a statement from YAL and demanding an immediate independent investigation. Late Friday night, the following statement was released on Cliff Maloney’s Twitter account, including a link to a statement from YAL founder, former president and current board chairman, Jeff Frazee. 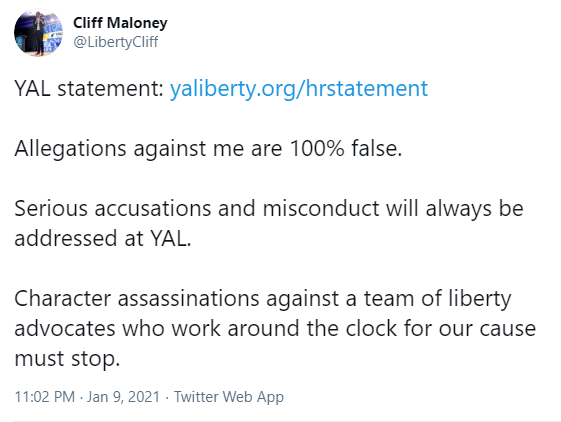 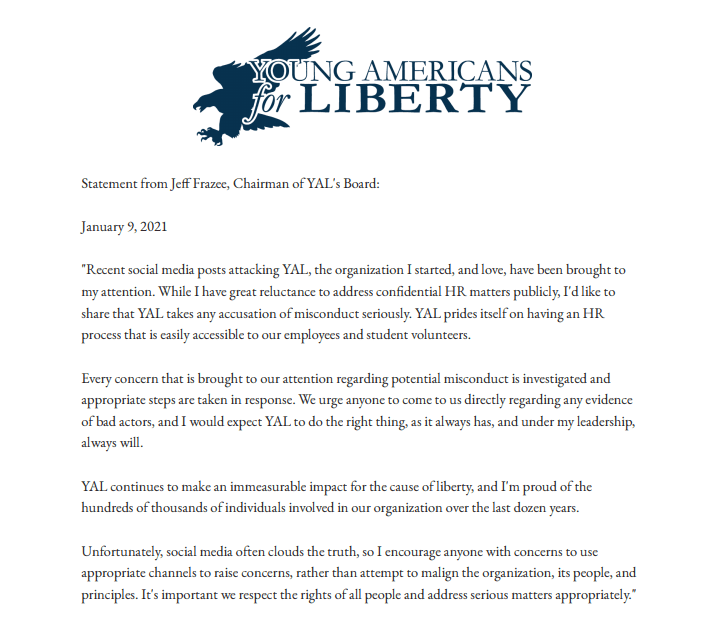 There was immediate outrage, with many calling the statements “weak” and criticizing the lack of commitment to specific action regarding the allegations being made. As individuals began commenting on posts on both the Cliff Maloney and Young Americans for Liberty twitter accounts, several reported being blocked as a result. Local campus chapters began issuing public statements, addressing the response of the their national organization leader, including American University, University of Tulsa, University of New Hampshire, and Mississippi State University, with more continuing to come out.

Please see our statement regarding #YALtoo and our national leadership’s response to it. pic.twitter.com/nXb1iiNFqU

The backlash to the posted statement grew to include prominent voices in the liberty movment, including liberty advocate and author Julie Borowski, and Reason Magazine editor Liz Wolfe.

I looked into this. Your sexually predatory behavior has been an open secret for a long time. *Multiple* people have reported you using proper internal channels. It's well-documented. The board has continuously not held you accountable- because you're "good at your job." #yaltoo https://t.co/P8X3s1sekt

Cliff, I spend SO little time thinking about your "team of liberty advocates." I'm an adult; I just don't think about libertarian college orgs that much anymore. People who are adults, with full-time jobs at libertarian orgs, have very little incentive to make these things up. https://t.co/JXePRYkeZF

As the #YALtoo hashtag continued to trend through the weekend, many began tagging public figures and elected officials associated with the organization, such as Thomas Massie, Rand Paul, Ron Paul, Glenn Jacobs, and Justin Amash. Former Congressman Amash posted a tweet thread regarding the claims on Sunday evening.

“Recent claims of misconduct suggest Young Americans for Liberty hasn’t adequately or always protected the rights of individuals in its care. As a longtime ally and contributor to @YALiberty, I’m devastated and saddened by the organization’s deficient response to the allegations. People deserve real answers about how allegations will be handled and investigated, not simply generic assurances that accusations of misconduct are taken seriously. This isn’t about making assumptions or prejudging guilt; it’s about identifying the specific steps being taken. At a minimum, any investigation should be conducted by persons independent of YAL, and anyone accused of misconduct should be placed on administrative leave pending completion. It will be difficult to rebuild trust, but it will be impossible without a full and fair examination.”

Recent claims of misconduct suggest Young Americans for Liberty hasn’t adequately or always protected the rights of individuals in its care. As a longtime ally and contributor to @YALiberty, I’m devastated and saddened by the organization’s deficient response to the allegations.

“Given the mounting allegations of sexual abuse and cover-up at YAL, it is clear that they need to order a truly independent investigation and fire anyone proven to have committed assault/harassment or complicit in covering it up. Sexual assault has no place anywhere. It is a disgusting violation of the autonomy and rights of its victims, they need to be protected and their abusers punished. If it turns out that it has been allowed to fester there, letting that continue creates more harm and more victims. Whether an independent investigation discovers that these allegations are true, or that they’re false or isolated, there is simply no good reason not to do it at this point. Ignoring it will not make it go away.”

Given the mounting allegations of sexual abuse and cover-up at YAL, it is clear that they need to order a truly independent investigation and fire anyone proven to have committed assault/harassment or complicit in covering it up.

“I joined YAL as a college student in 2008. I have worked alongside the organization for over a decade. My organization has been a sponsor and supporter of YAL since our inception. I have dear friends within its ranks, including Cliff Maloney, against whom many of these allegations have been levied… To young women within the liberty movement who have been harmed. I hear you, I support you, and I am so sorry that you’ve had these experiences.

There is also another lens through which I am processing this story, and that is through the lens of my role as a leader in the criminal justice reform movement.

I do not stand by cancel culture or internet mobs. Due process is an essential human right that must never be overlooked. This is exactly what I have seen the majority of women ask for in this case, and I join them in demanding an independent investigation. If that investigation proves misconduct, or the covering up of misconduct, those responsible should be held accountable.

Lastly, there are those who will use these stories to discredit the important and incredible work of YAL. I want to actively admonish them. This is a tremendous group filled with many hard-working, good people. They have done much to grow our movement. But that movement must be a secure space for all people, one that lives up to our values and ensures the rights of all are protected.”

When asked what prompted her to go public now, Addyson Garner replied that, “Inside pressure to handle sexual misconduct didn’t work, and more women were getting hurt.” She said that the incidents have involved multiple staff members, with the most recent occurring within the last six months. By applying public pressure, Addyson said she would like to see “a truly independent investigation, creation of a solid HR department, and removal of abusive staff starting with Cliff Maloney and Justin Greiss.”

At this time, there has been no further response from Young Americans for Liberty or Cliff Maloney.

Which Cisco Certification is Best for Students In 2021?