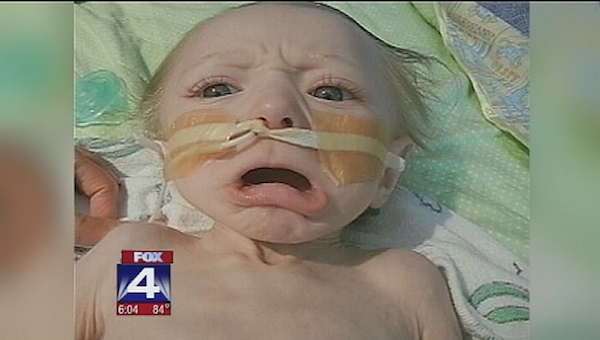 HOOD COUNTY, TX – Baby Riley is safe after he was found starved by his parents nearly to death. The young couple, Justin and Brittany Alston were sentenced to 60 years in prison after it was discovered that they had starved Riley because they were too lazy to take care of him.

Last December several teenagers were attending a party at the couple’s mobile home in rural Hood County when they heard crying from the back of the trailer. What they found was horrifying. Baby Riley was lying there emaciated, covered in urine and vomit. The teenagers called an adult who brought him to the hospital, where doctors who treated him didn’t believe he would live. Investigators believe that the parents may not have fed him properly for over two months.
Follow Us on Google+


“Brittany [the mother] told investigators when she was asked why she didn’t feed this baby she said that she had other things to do, like getting the oil changed in the car,” she said. The 21-year-old ‘parents’ admitted they preferred drinking and smoking pot with their friends instead of taking care of their baby.

“These parents, I don’t know if they wanted him to die but they were waiting for him to die and I believe if he had they’d have thrown him in the trash,” Hood County District Attorney Robert Christian said.

Doctors fed Riley through an IV until his body could finally accept food. He was then placed in a foster home and in just a few months has fattened up just like a baby should.