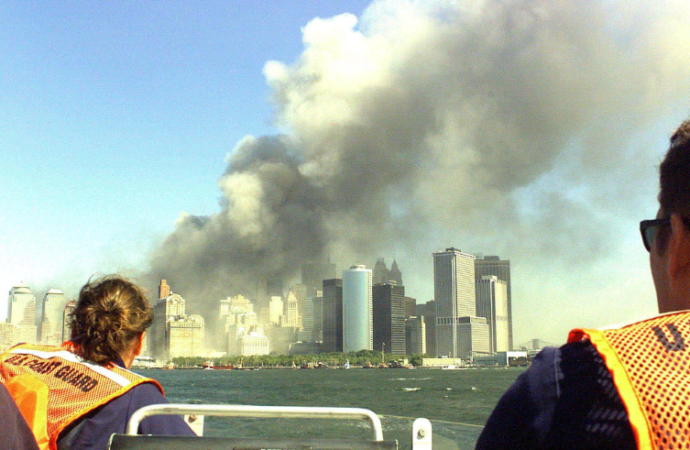 On the morning of September 11th, 2001, I woke up in our new home in Northern Virginia. We had just moved. The house was filled with unpacked boxes and taking care of them was my task for the 11th. This also meant that we were without radio, cable TV, and internet. I had taken the week off from my work as a reporter/producer for Dutch Television News, and I was looking forward to getting the new place set up.

The move had been strenuous, so I kicked back, read a novel, and enjoyed too many glasses of wine on the evening of the 10th. Thus, I got up a little late and my head was full of fuzz.

The phone rang at 8:50. It was Gerard den Hertog, of the foreign affairs desk at Dutch television news in Holland. Gerard told me to pack a bag and get to New York: a plane had crashed into the World Trade Center. I told Gerard I’d do it, secretly thinking, “Come on. Its probably a drunken Cessna pilot.” I frankly hoped that by the time I got to Reagan Airport that the whole thing would be over and I could return to my moving boxes.

My regular German cameraman was booked that day, so I had the additional headache of trying to find another cameraman. It was going to be an awful waste of time, but I dutifully got my travel bag out and shuffled around to get ready. On the bright side, I realized that if I actually ended up in New York, I would at least get to visit a good restaurant on the West Side.

Fifteen minutes later the phone rang again. Gerard shouted, “The other Tower has been hit! Get to New York as quick as you can!”

In an instant, the fuzz in my head disappeared. I felt as if every brain cell and nerve in my body had kicked into gear. This was it. Everything I had ever learned as a journalist was going to be put to the test. My experience. My talents. My knowledge. My physical endurance. It was all coming together in this.

Calling the European Broadcast Union in D.C., I managed to get cameraman Steve Harper to go with me. I had never worked with him before, but was soon clear that Steve was the right man for this news crisis, particularly since he was fast and aggressive.

By the time we made our travel arrangements, a third plane had hit the Pentagon, so my orders were changed for Washington.

I remember the emotional feel of that morning. No one knew what was going on. How many planes were out there? How many might come down? And as my wise-cracking camera man noted: maybe they have guys with AK 47s hidden all over D.C.. For the first time in my life as a journalist I was fearful, a fact evidenced by the longer-than-normal good-bye I said to my wife that morning.

I drove into D.C. watching hundreds of thousands drive out. They were evacuating. What was I doing?!

We started at the Vienna Metro station, doing several interviews with arriving evacuees and then traveling to the Pentagon. As expected, the press was kept way, way far off. But my cell phone rang again, and it was Gerard. There weren’t any Dutch television correspondents in New York. I was to drop everything and go to Manhattan.

We rented a car and drove to New York. The New Jersey Turnpike was completely empty. There were long stretches of highway where I could not see headlights ahead or behind me.

We got to the New York late in the evening and found Manhattan completely sealed off, so we rerouted to New Jersey. In the hotel room I turned on the television and finally saw the images that I had missed that day: the planes hitting and the Towers collapsing.

We started for the Tappen Zee Bridge early the next morning. Having lived in New York, I was confident that if we could get to the Bronx we could get into Manhattan via one of the smaller bridges over the East River. We did, arriving in Midtown around noon.

All this time I had been trying to collect information. Listening to news radio and calling friends in New York, hoping not to hear bad news. As it turned out the only one of our friends who worked in the WTC was on medical leave for an operation.

In the hotel I turned on the television and moved through the local news channels looking for information. I had to have a news feature for broadcast ready by midnight. At that moment I was the only Dutch television reporter on the ground with a camera. I had to come up with something.  And then it popped up. There were rumors of a make-shift morgue on the West Side around 33rd Street. That is where we went.

The first thing we found at 33rd and the West Side highway was a collection organized by residents of the area: they were gathering water, food, gloves, and clothes for the thousands of rescue workers pouring in and for those displaced by the disaster. It was New Yorkers – Americans at their best – reacting practically and cheerfully to pitch in and help.

As we finished filming the collection, I was approached by a young Ecuadoran man leading a group of six others. They were from a youth group at a Spanish-speaking Protestant church in Queens. They were looking for their friend, John Gamboa, who worked in the World Trade Center and was missing. They saw my microphone and the camera and assumed that I knew what was going on.

Among the six was a young woman around the age of 18. She was Gamboa’s fiancé. She showed us pictures of herself with John on an excursion to the Statue of Liberty, the Twin Towers gleaming in the background. For the next hour we went with them as they looked for John Gamboa.

They never found him. He died on September 11th, and his body was never recovered.

This post 9/11: The Day I Wasn't Ready for, but Mustered My Will to Act was originally published on Intellectual Takeout by John Elliott.