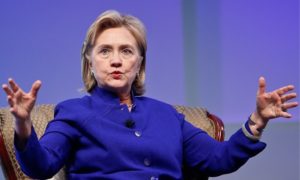 Interestingly however was something included in a speech transcript regarding a foreign policy position which Clinton has long held, and repeated during Sunday’s second debate. That is her war-hawkish position on levying a “No-Fly Zone” over Syria as the country wades through a brutal civil war.

As reported by Russia Today (RT) in a leaked email transcript, Clinton admits that her policy position on the “No-Fly Zone” would indeed create a situation causing mass Syrian casualties.

“To have a no-fly zone you have to take out all of the air defenses, many of which are located in populated areas. So our missiles, even if they are standoff missiles so we’re not putting our pilots at risk— you’re going to kill a lot of Syrians,” Clinton admitted.

She then expressed concern that would make that “intervention that people talk about so glibly” a full-fledged “American and NATO involvement where you take a lot of civilians.”

It is interesting to look at this forethought and wonder how Clinton can still openly defend this position, especially when it can be argued that a “No-Fly Zone” would essentially be the beginning of World War III. During the Republican primary process, the Republican Senator from Kentucky, Rand Paul, laid this case out very clearly. Paul argues that attacking Russian planes which were invited to fly in that air space by the sovereign host nation, an act necessary to protecting a “No-Fly Zone,” is a “recipe for WWIII.”

Clinton, not shockingly, again appears to be in favor of war. Worse yet, this is not just war, but a war which she admits would cost “a lot” of casualties (not to say that there are wars with low casualties). Has Clinton ever met a war she did not like?