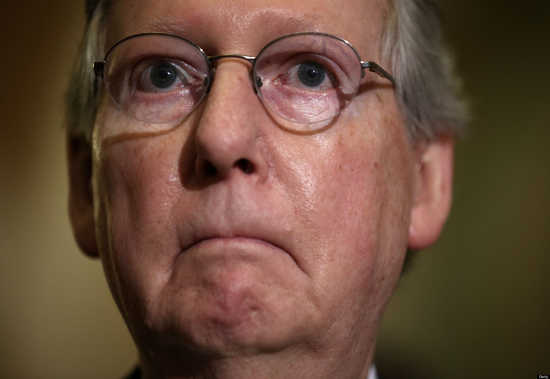 Senator Mitch McConnell (R-KY) has faced a tremendous backlash from conservative grassroots groups for the $2 billion appropriation inserted into the budget deal that reopened the government and raised the debt ceiling of the United States. It’s being called the “Kentucky Kickback”, and it’s laying bare the ideological divide that’s causing the civil war in the Republican Party.

The Olmstead project is a lock & dam infrastructure project on the Ohio river that was approved by congress in 1988. It was considered extremely delayed even then. The current infrastructure being used for the locks is old and outdated. Many experts believe that communities and industries close to rivers receive great benefit from the locks, but the local commercial vessels do contribute to construction in the form of a fuel tax. Still, they want other taxpayers to step in and pay the bills. 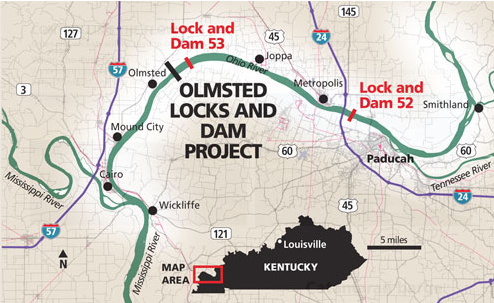 And consider this: The appropriation inserted in the bill was not placed there by McConnell. It was inserted by Senators Diane Feinstein (D-CA) and Lamar Alexander (R-TN), who is the ranking member of the Senate Energy and Water subcommittee. Perhaps most importantly, it was specifically requested by the Army Corp of Engineers. For this, some are singing McConnell’s praises.

Chris Miles of PolicyMic claimed that, “In the grand political poker game that was the shutdown, the Kentucky senator played his cards expertly.” And he went on to say, “It was an investment in jobs, and a far-sighted investment at that. This “kickback” will help the region grow for years to come.”

And yet, despite the attractiveness of the project, a deeper look at this “public works” project will tell you all you really need to know.

Congressman Ed Whitfield of Kentucky called the project a “complete failure“. The Army Corps of Engineers that requested the funds did so because they’ve blown through the cap on spending, initially set at $1.7 billion. It’s spent $1.6 billion and the project isn’t even halfway done. The Corps is saying that they might be done by 2020, but probably won’t be ready until 2024.

Just how long are we supposed to wait to see these supposed “investments” pay off?

The Corps estimates that the improved lock system will add $640 million in annual benefits to the national economy. But the question is, for how long? And you might forgive a debt weary American public for being skeptical of an institution that made an enormous miscalculation for how this project will engineered. The Corps is dropping pieces of the dam directly into a river, instead of working in a dry basin as they stated they would do. What they thought was a brilliant design, has turned out to be more difficult and more costly than imagined.

Maybe this central planning doesn’t work so well after all?

Some people (and corporations) who live along the Ohio river might see some benefit over a decade from now. But whether they really do or not, the reason that this issue highlights why there is rancor in the GOP is because the establishment conservatives are still very much convinced of the ability for government to stimulate the economy.

As President Richard Nixon said, “We’re all Keynesians now.” These people believe that government can create jobs by sinking money into infrastructure. They believe that it is the role of government to step in and centrally plan the economy by “investing” taxpayer money into roads, public transportation and bridges to nowhere.

But that’s not what the grassroots believe.

The American people’s approval rating of the Affordable Care Act is 38%.  48% disapprove of the law, and it’s easy to see why. Healthcare.gov is the perfect example of the failure of central planning. It’s traffic has dropped 88% since its inception due to technical failures. The cost of the website was enormous at $394 million and exceeds the venture capital funding of Facebook, Twitter, Instagram and Linkedin.

President Barack Obama claimed that people would be able to keep their health insurance. But how can they keep it when their premiums are skyrocketing? Or if their employer is dumping them from their healthcare rolls? Like the Olmsted Dam project, Obamacare is another example of the failure of central planning.

The government doesn’t create jobs. It destroys capital by redistributing it and wasting it under the guise of “investment”. The conservative and libertarian grassroots have been educated by the likes of Grover Norquist, Ron Paul and read the works of Austrian economists such as Friedrich Hayek. These are people who understand that if you take a bucket of water from one end of the pool and dump it in the other end, you don’t increase the total amount of water. Government spending doesn’t create jobs. It takes money from the productive sector, and redistributes it to the unproductive.

The reason for the civil war in the GOP is because some believe in the ability for government central planning to stimulate the economy. Others do not. And that is the problem with the “Kentucky Kickback”.

Cop Blockers! Hot libertarian ladies taking it to the streets!