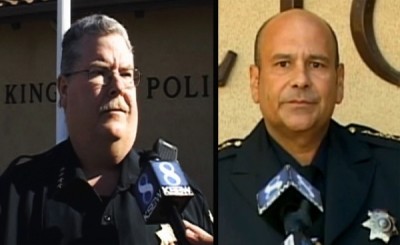 KING CITY, CA–A mind-blowing case of police misconduct led to the arrest of seven officers last week, two of whom were police chiefs. It’s been brought to light by the District Attorney in Monterey County that Nick Baldivez, King City’s former police chief, was working with the current police chief Bruce Miller in using their authority to exploit the poor.

The claims were brought to light when residents of King City began voicing their distrust of the 17 member police force during community meetings. District attorney investigators watched footage from these gatherings and began to put the pieces together about what the police department was actually doing.

King City residents told District Attorney Dean Flippo, “The police are taking our property. They are taking our cars. They take our money. And we can do nothing about that.”

“The victims were economically disadvantaged persons of Hispanic descent who were targeted by having their vehicles impounded, towed and stored by Miller’s Towing,” Flippo said.

Police used their power to confiscate and impound hundreds of cars in King City. They targeted poor Hispanic immigrants who could not afford the impound fees or speak English. Police turned a hefty profit, as the cars cost them nothing, and they either kept them or sold them.

The officers were arrested on February 25th by five teams of FBI agents, Monterey County Sheriff’s deputies, and Salinas police officers. The six King City police officers are all on paid administrative leave. Chief Bruce Miller’s brother Brian was also arrested, and is the owner of Miller’s Towing Company.

Although the accused were booked into the county jail, all posted bail within six hours and were released.

Chief Miller denied the accusations in an interview as he was leaving jail.

“I’m completely surprised. Accept a bribe? I’ve never done that. I’m blown away, I did not know this was coming,” Chief Bruce Miller told the reporter.

Continuing to claim ignorance, he stated that he was aware there was an FBI investigation but had no idea he was even a suspect, and is lamenting his “soiled reputation.”

Flippo disagreed with Chief Miller’s professed innocence during a press conference that same day. In his office’s 6-month investigation into the matter, he found that officers clearly violated their oaths. “My conclusion is the citizens of King City deserve better than what they have been receiving,” Flippo said.

Sgt. Bobby Carrillo was deemed the “ring leader” by investigators.

“For every 10-15 vehicles impounded by Sgt. Carrillo, he would receive a free vehicle for himself, or whatever he wanted to do with it,” Flippo said.

The police department was closed after the arrests, since nearly half the force was in prison. To the citizens of King City, that knowledge was likely more heartening than frightening.

Should men be exempt from paying child support? (PODCAST)