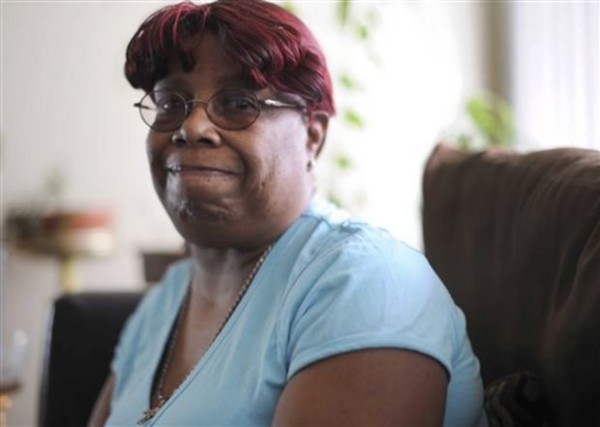 DETROIT, MI–Detroit can bring out the best and worst of humanity. Earlier this month, Steve Utashwas driving when 10-year-old David Harris stepped off the curb in front of his car. Surveillance footage shows Utash had no time to stop, and he accidentally hit Harris, breaking the boy’s leg. Utash, a 54-year-old father of three, immediately got out to help when he was attacked by a mob of around 10 to 12 people.

Deborah Hughes decided to take action when none of the bystanders stepped in. She grabbed her handgun and put it in her coat pocket before leaving her home and crossing the street to bravely protect Utash.

“I go over there and I say, ‘Don’t nobody else hit him. Don’t put your hands on him. Leave him alone!” And everybody backed up and let me go to work on your dad,” Hughes told Utash’s son, Joe when they finally had a chance to meet.

Utash was unconscious and bleeding from wounds to his head when Hughes came to his rescue.

“I laid over the top of him, I put my arms around him and I said, ‘You are safe. Nobody’s going to hurt you no more.”

Hughes managed to briefly revive Utash, who only asked, “Is the boy dead?” Hughes told him the boy would be fine, and continued waiting with him till help arrived.

Joe Utash profusely thanked Hughes for saving his father, which moved the retired nurse to tears. Utash’s son isn’t the only one praising Hughes for her act of mercy. Detroit Police Chief James Craig visited her house personally to thank her for what she did.

“Just her presence, offering aid to this gentleman, may have saved his life,” Chief Craig stated. He’s clearly appreciative of citizens willing to step in and keep the peace given the city’s notorious crime rate and lack of police.

While Utash remains in critical condition in a medically induced coma, the boy Utash hit is recovering well from his leg injury. Five members of that mob are now in police custody, and one of them is being charged with ethnic intimidation for statements he made while beating Utash. The rest are being charged with assault with intent to murder, and assault with intent to do great bodily harm. An investigation for other people involved in the beating of Utash is ongoing.

Kids Expelled For Bringing Confederate Flag To School. Are We Still Fighting The Civil War? (PODCAST)