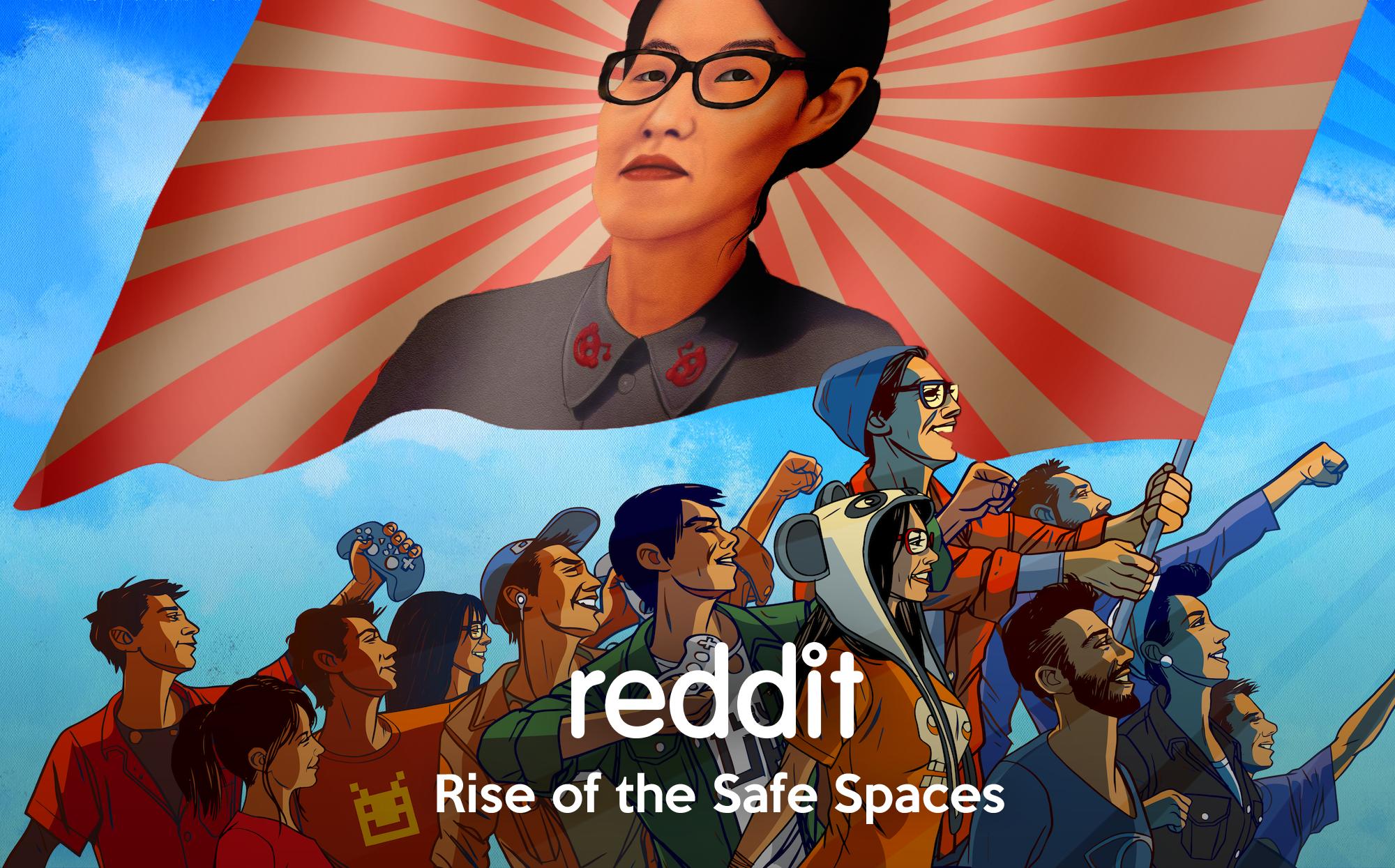 Ellen Pao, CEO of Reddit, or Chairman Pao as some users on Reddit have taken to calling her, put her stamp on the popular website as many feared she would.

Yesterday Reddit began banning community forums known as subreddits in accordance with an anti-harassment policy adopted in May.

The following is the announcement that was posted yesterday. 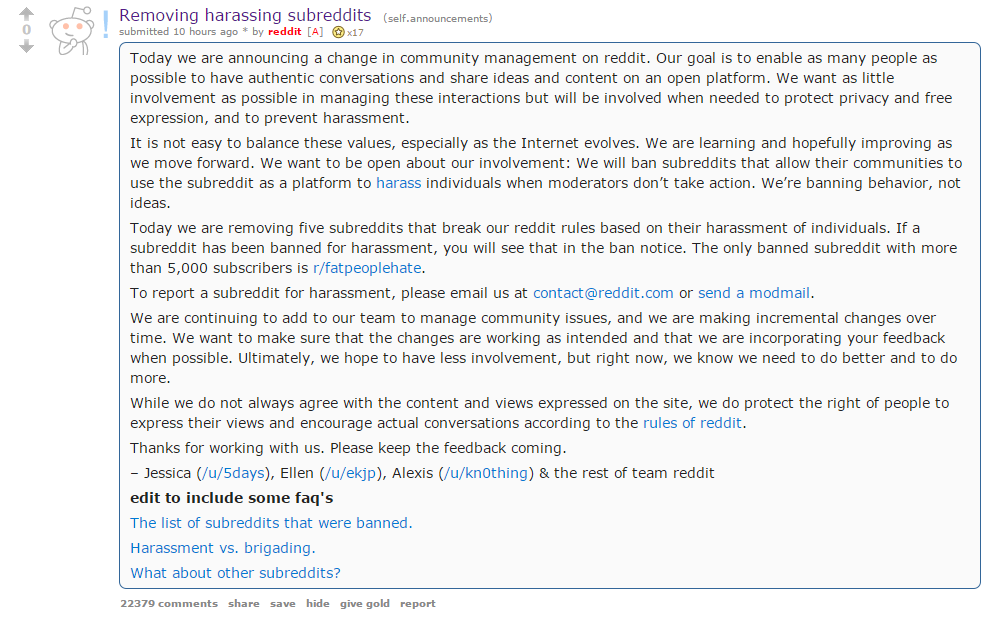 You may have heard of Ellen Pao from her failed gender discrimination case against Venture Capital firm Kleiner Perkins. Pao alleged the firm denied her a promotion because of her gender but after 2 days of deliberation the jury dismissed the charges.

Some interesting information about Pao emerged from testimony and emails during the trial, however. Work emails revealed her to be a callous and resentful employee who bullied her colleagues. Strange that she now wants to police Reddit for bullies, or perhaps this is just her scratching her itch and taking it out on Reddit users she doesn’t like?

The largest of the banned subreddits was /r/fatpeoplehate, which was the 13th most active community on the website.  The subreddit was a place where fat people and the fat acceptance movement were routinely mocked. That particular subreddit had over 150,000 people subscribed.

The banning of the forum didn’t quite go as planned when users began flooding the entire site with fat people hatred and satire. This event has been dubbed, “The Fattening.”

At the time of writing, the Reddit front page /r/all, which displays all the content on reddit, even subreddits you aren’t subscribed to, has been inundated with posts about the outrage of /r/fatpeoplehate being banned. All the mods from that subreddit have been “shadowbanned” (shadowbanning is when reddit moderators secretly ban you, the site appears perfectly normal to the shadowbanned user but none of their activity, upvotes, comments, or posts show up to other users) along with every possible iteration of the fatpeoplehate name, fatpeoplehate 1-11, obesepeopledislike, etc.

The other four subreddits initially banned were /r/hamplanethatred (3071 subscribers), r/transfags (149), r/neofag (1239) and r/shitni**erssay (219).  While certainly offensive, users are claiming that some of those communities don’t fit the criteria for banning that Reddit put out in its announcement. 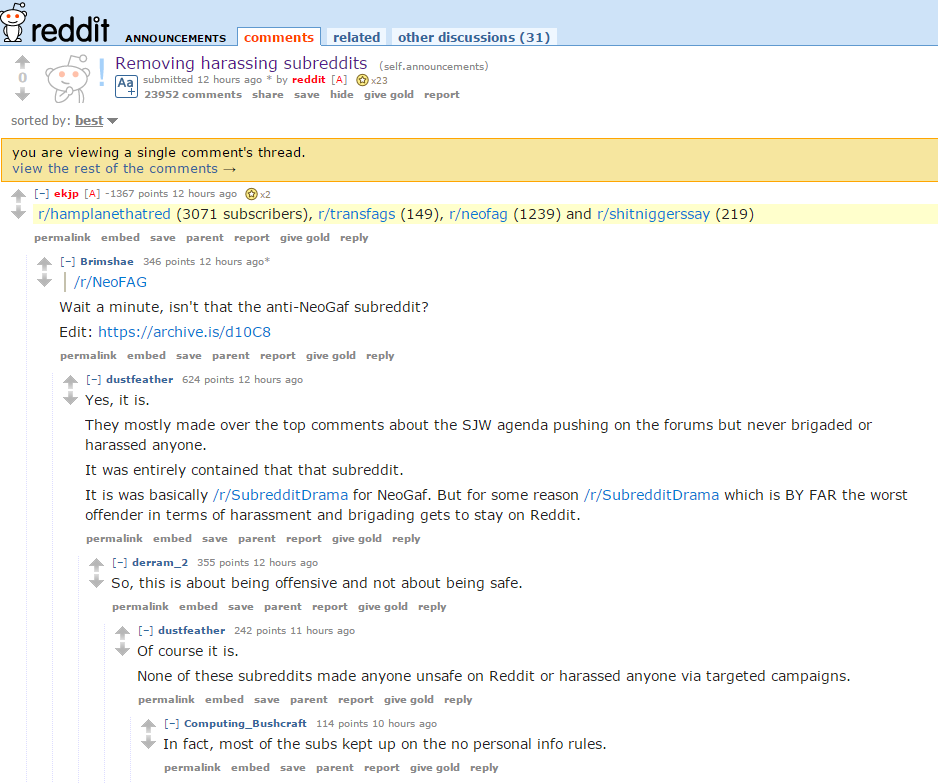 Reddit is also apparently banning people posting pictures of Ellen Pao. 11 of the top 25 posts on /r/all are from a subreddit called /r/punchablefaces and they are all of Ellen Pao. Shockingly that subreddit continues to exist while other new and much smaller subreddits like /r/paoiskillingreddit have been banned.  9 of the top 25 are about the banning, the remaining spots are posts mocking the reddit admins as fat, accompanied by various pictures of land whales, hamplanets, and butter golems.

This is turning into a serious problem for Reddit with many users saying they are now going to move to a similar site called Voat. Others are claiming they will no longer advertise with Reddit or buy Reddit gold, and many users are asking people to install Adblock plus in an effort to dry up ad revenue for Reddit.

There are early indications that the Reddit admins may have finally crossed the Rubicon on the road to alienating their user base. User activity on their main competitor, Voat.co had been rising steadily since social media censorship became an issue during the #GamerGate controversy, but in the past few hours their figures have skyrocketed.  At the time of writing, there are over 3,700 active users on Voat’s alternative to /r/fatpeoplehate —almost double its number of subscribers.

Reports on Reddit also confirm that Voat has been incredibly slow today, due to the massive influx of users to the site.

Reddit founder Alexis Ohanian, defended Reddit’s move in a post on twitter saying, “When we are using the word “harass”, we’re not talking about “being annoying” or vote manipulation or anything, we’re talking about men and women whose lives are being affected and worry for their safety every day, because people from a certain community on reddit have decided to actually threaten them, online and off, every day.”

Is that really the motivation behind this however? Reddit recently raised $50 million in funding from venture capital firm Andreessen Horowitz and others. There’s speculation that these moves are actually more about making Reddit more palatable to mainstream advertisers rather than the stated noble goals of creating a safe space for everyone. But as this Fortune.com article asks, is it possible for Reddit to become more business friendly without losing its soul? Judging from the mostly negative reaction, I doubt it.

The Reddit user base is notoriously anti-censorship and while it’s still unclear if these moves will hurt Reddit more than help, I feel this may spell the beginning of the end of Reddit’s internet dominance and moniker of ‘The front page of the internet.’

Scott Walker is Out of Touch with Americans

5 Reasons Why Rand Paul is the Most Hipster 2016 Candidate