The Catholic Church may soon canonize an English writer who said “It is terrible to contemplate how few politicians are hanged.”

Catholic admirers of G.K. Chesterton have long campaigned to have the English writer sainted. Now, Bishop Peter Doyle of Northampton has appointed Canon John Udris to investigate Chesterton’s cause for canonization.

Doyle made the appointment after he discovered that, while a cardinal in Argentina, Pope Francis had approved a prayer asking for Chesterton’s intercession.

One of the most accomplished Christian apologists of the last century, G.K. Chesterton eloquently defended the Christian faith in tracts like Heretics and Orthodoxy. In these books, Chesterton also detailed a complete – and decidedly libertarian – political philosophy.

Chesterton warned that, as society became increasingly secular, it was setting government on the altar previously occupied by God. Rather than seek after the perfection of heaven, Chesterton argued, the modern man was empowering rulers who promised to perfect humanity here on earth.

Chesterton admonished readers to turn back to God, to community, and to the family. He wrote “It may be said that this institution of the home is the one anarchist institution. That is to say, it is older than law, and stands outside the State.”

Chesterton is sometimes mischaracterized as a socialist because he is associated with an economic viewpoint called “distributism.” Yet in Chesterton’s day, the word “distribution” did not connote policies like those of President Obama. Instead, Chesterton’s stance was that we ought always to prefer more competition and localized economic activity. 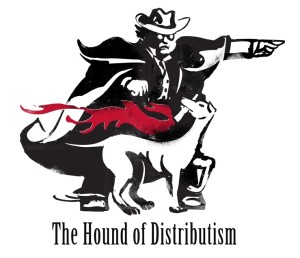 Far from being a socialist, Chesterton was categorically distrustful of central governments. He taught that the Christian doctrine of original sin is a “logical negation of oligarchy.” Chesterton recognized that elected officials, just like the rest of us, are fallen human beings, by nature children of wrath.

Chesterton’s brother, Cecil Chesterton, summarized G.K.’s politics by saying that “he is a Tory of the seventeenth or early eighteenth century, born out of his due time. In the Cabinet of Bolingbroke he would have found quite a sympathetic atmosphere. He would have found men, by comparison with their opponents at any rate, sympathetic with the national aspirations of the Native Irish. He would have found men who disliked Imperialism and foreign complications, and held that our fleets and armies ought to confine their energies to the defence of the actual soil of England.”

“Conservatism will die at the hands of Christianity”: Interview with American Atheists at CPAC (PODCAST)