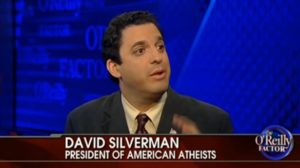 Austin Petersen and David Silverman, president of the American Atheists, sit down to discuss atheism and conservatism at CPAC 2014. Petersen and Silverman, who are both secular, discuss the very different strategies they use in interacting with theists.

The American Atheists are known for their confrontational style; Andrew Stuttaford, a writer for Secular Right, has called them “the Wahhabis of atheism.” The group was initially granted a booth at CPAC 2014.

On this episode of The Freedom Report, Silverman stands by his comments, saying “We were not here to make friends. We were here to make a point.” Silverman says that, though he supports economic freedom and gun rights, he does not self-identify as a conservative because the word connotes Christian baggage.

He warns that Christianity will be a political hindrance to conservatism, and predicts that there will be an atheist president in his lifetime.

All that and more on The Freedom Report podcast!

Catholics Could Soon Have a New Libertarian Saint