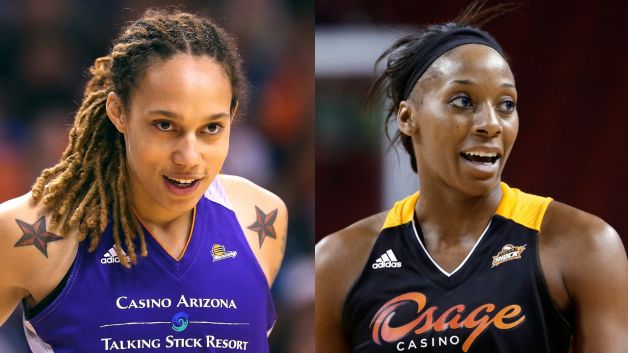 And so it begins.

Just like straight couples, homos get preggers, pissed, and divorced too.

The Women’s National Basketball Association star, Brittany Griner, is in a marital feud with her wife, fellow WNBA player, Glory Johnson over a lot of money and a secret in vitro procedure.

Griner says Johnson had the in vitro procedure done without her knowledge, and so a day after Johnson announced her pregnancy and inability to play in the upcoming basketball season as a result, Griner petitioned for an annulment to the marriage.

Griner said she felt “pressured into marriage under duress by Johnson’s threatening statements” and said the marriage was “based on fraud.”

Johnson is now requesting $20,000 per month in spousal support and a $10,000 advance toward legal fees for her attorney.

Johnson’s counter-petition to the annulment says she needs financial support because her WNBA salary will be reduced during her pregnancy leave and her finances have been dried up from wedding expenses, buying furniture for the couple’s home, and of course, the in vitro procedure.

Johnson also says she can’t seek employment outside basketball because she’s pregnant with twins, and that’s classified as a “high-risk multiple pregnancy.”

She needs so much money allotted each month because she requires “household assistance, personal trainers, and medical care not covered by her current insurance.”

Is this why men aren’t getting married anymore?

WNBA Agrees To Support Abortion With Every Ticket Sold