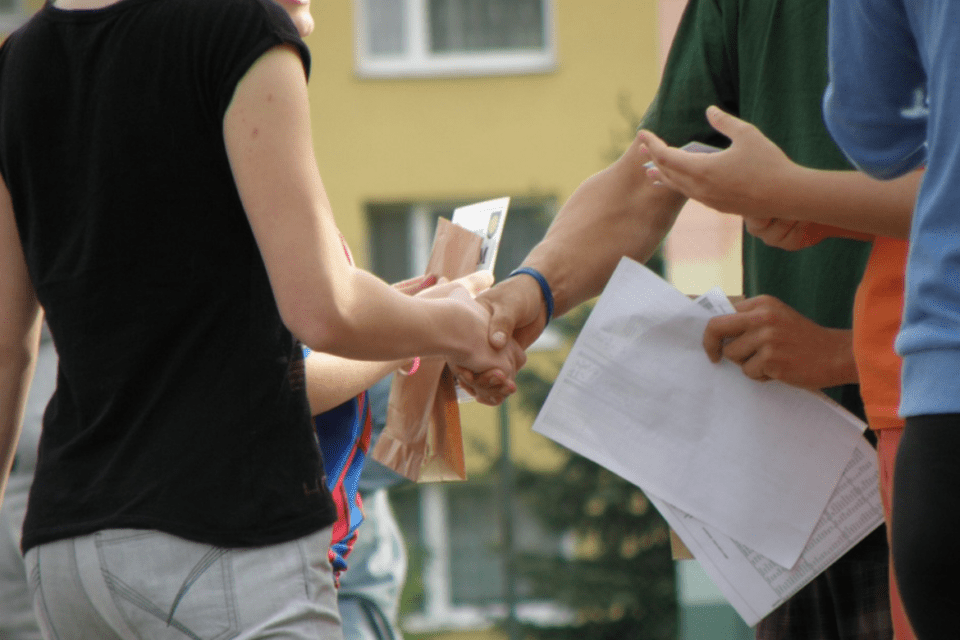 Campaign signs fill the dumpsters, ballots are everywhere, and TV stations are dusting off their nonpolitical commercials again. The election is over, and it looks like the other guys won.

Politicians and celebrities have been saying maddening things, completely mischaracterizing you, and you’ve just about had it. Even more insulting, the victor is now calling out to you.

“It’s time to unite and move forward together!”

It feels like the end of The Empire Strikes Back. You’ve lost a battle of red and blue lightsabers and now find yourself trapped at the end of a walkway suspended in the air. Your opponent reaches out, inviting you to join the Dark Side. You know that an undivided nation is important, but to join forces with the side that seems to oppose everything you believe? No thanks! You’d rather pull a Luke Skywalker and base jump off this antenna thing without a parachute.

You’re right not to embrace an ideology that you think is harmful. But that doesn’t mean the nation has to remain so fractured. You see, we’ve allowed ourselves to be sorted in all the wrong ways—by race and wealth, for example—and our political division has reached an unhealthy level. We’ve forgotten the ways we can come together where you advance your values—not abandon them. Ways that are empowering and satisfying, even if nobody you voted for ended up in office.

We need to rediscover the right way to unite.

We get caught up in the national races, and it’s easy to see why. National news and opinion shows have the largest budgets, and presidential elections make for a compelling story. But the federal races are also the ones where you have the least influence. You find yourself feeling frustrated and powerless, left to grumble at the headlines on your social media feed.

How about we focus closer to home? For a moment, don’t worry about uniting with the president. Or your governor. Zoom into your county, and then your city. All the way to the neighbors on your street, and your own friends and family. Especially the ones that you’re pretty sure voted differently than you did. Can you unite with a few of them? Maybe you can.

And why would you do this, you ask? It’s not simply to work on your personal relationships, as important as that is. And it’s not to make it easier for your political opponents to get things done that you don’t like. On the contrary. Uniting the right way enables you to make real progress toward your political goals, too, starting where you have the most influence.

You should feel a little empowered already, having just changed the game. It’s individual to individual now instead of you vs. half the nation.

So, you’re standing next to your brother-in-law at your nephew’s birthday party. One of you is firmly on the right, and the other is immovable on the left. What could there be to unite on?

Here’s the secret: to be unified isn’t to see eye-to-eye on everything. (Have you ever been married?) Your goal right now isn’t to both end up on the same side of the aisle, or to convince each other of anything, really. It’s to spend a little time digging through issues and positions and philosophies to find the veins and nuggets of agreement that are already there. You have a headlamp and a pickaxe, and you’re looking for gold.

You might start with immigration and the border. Chances are, you and your brother-in-law aren’t in full agreement here. And that’s fine! Use that pickaxe of yours and break it down into smaller pieces. Take a look at the idea of a border wall, a possible path to citizenship for those here illegally, and national security considerations. Disagree on all of these, too? Break them up even further to look for those nuggets.

When you find a chunk of policy where you disagree and can’t see how to break it down further, no problem! Don’t feel like you’ve failed if you haven’t convinced him to see it your way, and don’t feel pressure to rethink your worldview to align with his. Resist the temptation to try to change each other right now. Instead, set it aside into a metaphorical bin labeled “maybe later” and move on. Not because you’re afraid of conflict, but because arguing about it hurts what you’re trying to do at the moment.

Sometimes all you can come together on is your overarching goal—that you want people to be safe, or happy, or have a chance. This is a nugget, too.

Don’t give up. Keep looking for the points where you already agree, however small. The bits add up, and it will be worth it.

Now that you have a growing pile of golden agreement nuggets (I should totally trademark this), what is it good for? Did we gather it just to know it’s there?

Well, yes. At first, anyway. You’ve done the work to identify some of the ways you can stand together, and I’d say you can check off the box that you’ve answered the call to unite. You have come together with someone politically different than you. And you’ve done it while holding on to all of your principles. Even if nothing else happens, both of you have learned something by going through the process, and it feels right.

Soon, though, you’ll start to see other benefits. When he is talking with his like-minded friends about the crazy people on your side of the aisle, he’ll thoughtfully pause and tell them that actually you have a reasonable position, even if he doesn’t agree with you. Occasionally, you’ll do the same for him.

And here’s where it gets really interesting. You’ll be thinking about something political and get an idea—something the two of you could support. Join forces and do something. Not like Luke joining the Dark Side. But more like Thor and Loki. They are mostly enemies, but every couple of Marvel movies they find themselves working toward the same goal together. The foe didn’t see it coming. It’s beautiful.

We’re not talking about a compromise here, where you give something up to get something in return. What you’re doing is having your eyes open enough to see the things that you already agree on, recognizing that you might as well combine your efforts on that one thing and increase your chances of success. Imagine you want to go to Virginia and your neighbor is set on visiting North Carolina. Well, if you’re starting your road trip in California, your route is the same for most of the way. You might as well share the cost for the stretch that you can and then part ways when you must.

The first two steps are to think local and small. But when you find ways to connect with political rivals like this, big things can happen. Movements are born and coalitions are formed. Like an alloy of two metals, you can introduce solutions and policies that are solid. Solutions that outlast the back-and-forth of new administrations tearing down everything that was built by the last one. By reaching across the aisle and having the patience and nuance to tackle one small problem at a time, the big problems will begin to diminish.

Common ground was once our most valuable real estate. Today it’s becoming neglected, ignored, and overgrown. It’s time that We the People reclaim and restore it, and rediscover the surprising power we have when standing there.

It begins with two individuals who may not agree on all that much. And one of them is you.

We can do this during an election year. Or any year. Whether your candidate won or lost. This is the right way to unite.

Jefferson Shupe is a writer whose passion is to research political issues and find common ground where progress can be made. He is the author of The Bathwater Brigade, a novel about a group of college students taking on a divided world in the aftermath of a police shooting.