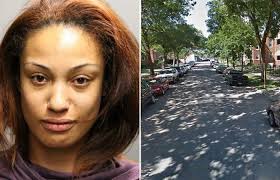 A woman posted a video on Snapchat Thursday of her friend being raped after the two fought over a man, prosecutors allege.

The woman that posted the video — 36-year-old Beth Rae Harris — has been charged with nonconsensual dissemination of sexual images, and is being held on a $150,000 bail by Cook County Judge James Brown, according to NBC News.

The two women got in a fight Aug. 24 but allegedly made up and then went to a party at a hotel where the victim had copious amounts to drink, Assistant Cook County state’s attorney Nora Gill said in a report. They returned to Harris’ apartment where the victim fell unconscious, after which Harris egged on at least one man and possibly multiple men who were at her apartment to rape the victim, the prosectors allege.

The victim was unaware of what had happened until she awoke the next morning and saw a video of herself being raped. Authorities say that the video was seen by various Snapchat users who determined that Harris had recorded and posted the video.

Snapchat has a list of guidelines for users which condemn content depicting illegal and violent acts, and users can also report safety concerns to Snapchat. “Never post, save, or send nude or sexual content involving people under the age of 18 — even of yourself. This includes adding drawings or captions to a Snap to make it sexual, even as a joke,” the guidelines read. Snapchat also prohibits pornography.

A woman in Ohio also posted a Snapchat video of herself being raped earlier this month, and the man responsible was later found and arrested, according to the Toronto Sun.

Prosecutors have not released the victim’s name, the mens’ identities, or why they were at Harris’ apartment. The police have yet to charge any of the men with a crime.

The Daily Caller News Foundation contacted the Cook County Jail and Snapchat support, but did not receive comment in time for publication.