Libertarians across the nation can breathe a collective sigh of relief today as we buckle down to watch yet another nationally televised political circus play out in the GOP primary. Our voice of reason, Rand Paul, hasn’t been cut out from mayhem just yet. It looks like we can look forward to a few more swipes at the likes of Chris Christie before the end of this campaign.

As we all remember, the media was not kind to Rand’s father Ron four years ago. In fact, they seemed hell-bent on pushing his anti-establishment ideas out of the Republican discourse, even going so far as to leave his name out of polls he did well in, while focusing their praise on those who underperformed.

This cycle, with candidates like Donald Trump, Ted Cruz and Ben Carson leading the pack in the race for the GOP nod, has been thought of as the year of the anti-establishment candidate. So why has the intellectual and literal heir to Ron Paul done so disappointingly poorly?

It was a little over two years ago when we first got our hopes up about a Paul victory in the Republican primary. The younger Paul was still riding the momentum from his Kentucky senate victory in 2010, and had emerged as a front-runner for the 2016 Republicans. That much could easily be written off, it was after all, an entire three years before the next presidential election. 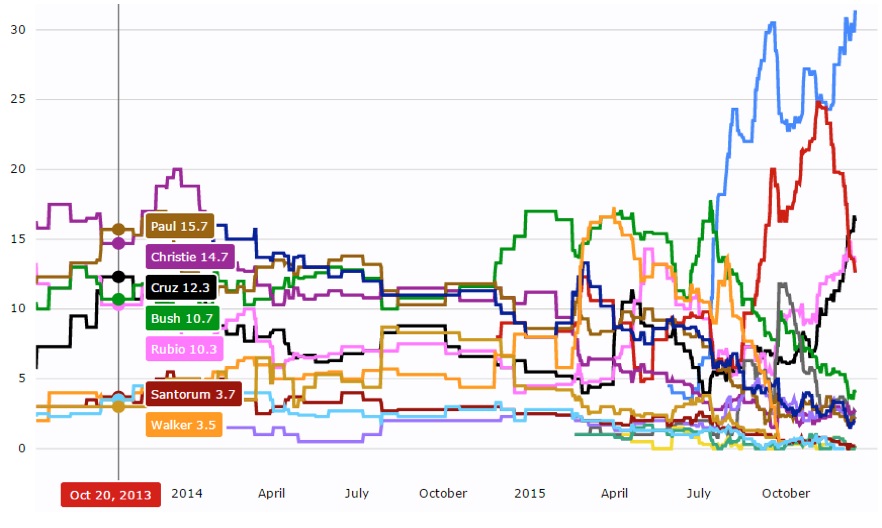 But little Paul kept at it, and after taking a few dips below tired old neocons like Huckabee and Christie, he reemerged as the front-runner in the summer of 2014, and then again in late November, before finally dropping down again as Jeb Bush began to rise above the pack. Alas, fate seems to be telling us that this would be the last time in the 2016 cycle we would see our man doing so well in the polls. To make matters worse, as the campaign wore on, whispers of dissent began to be heard from behind hardcover copies of Human Action and in between episodes of The Tom Woods Show.

Among Ron Paul’s more hardcore libertarian following, Rand Paul had begun to draw criticism for watering down his positions to fit the mainstream conservative mold. He stopped talking about the absolute right to discriminate for private property owners. He started talking about drug courts instead of about outright legalization. Had Rand gone soft on us? Many libertarians started to wonder, and still do wonder today.

Before I get into an analysis of what went wrong (and right) with Rand’s 2016 presidential campaign, let’s set one thing straight: He’s still one of us.

I’m sure we all rolled our eyes when Obama’s views on gay marriage “evolved” just before the 2012 election, and the older and wiser of us may even remember how George W. Bush campaigned against nation building in 2000 before going on to invade two countries. The point is, it shouldn’t be surprising to us of all people who politicians mislead and sometimes outright lie to the public about their positions on issues to get elected. It is a well-documented phenomenon that candidates will swing farther left or right to appeal to win primaries and then move to the center for the general election.

I hate to burst the bubble of everyone who was attracted to Ron Paul’s frankness, but libertarian politicians are not immune to this, nor should they be, if they want to get elected. How do I know Rand Paul is doing this rather than genuinely evolving his beliefs? Rand grew up sitting around the dinner table with his father’s frequent house guest Murray Rothbard. If you don’t know who that is, just know this; he takes libertarianism to its most extreme: anarcho-capitalism. That’s an ideology the elder Paul has semi publicly flirted with on more than one occasion.

A teenage Rand certainly took those lessons to heart, and when he campaigned for senate no one doubted he was every bit as radical as his father. I could be wrong on this, but I doubt that a principled ideologue’s beliefs would change so dramatically in a mere five years. I certainly do doubt however the sincerity of Donald Trump, who was cheering for Obama while Rand was fighting for liberty.

Rand may not be the milquetoast conservative he sometimes makes himself out to be, but what good is a strategy that involves pretending to be something you’re not? Ask Donald Trump. The billionaire demagogue has been far from consistent; trampling all over the political spectrum since he first gained his fame, and shockingly few people seem to care. As he’s so fond of pointing out, he’s currently way up in the polls.

This is not to say that Trump will actually win the nomination; the costume he’s put on for the primaries is one that the establishment is probably too afraid of to allow. However, that doesn’t mean we libertarians shouldn’t hold our noses and take notes. What I believe we are witnessing now are the death throes of the modern GOP. The party establishment is weak, it has no clear leader. Hillary Clinton (yuck) is almost inevitably going to be our next president. History has shown that it’s at times like these when one party begins to completely collapse, and the political scene becomes increasingly dynamic.

A party can only take so many losses before it starts to lose credibility, and when that happens, all sorts of unorthodox candidates start to emerge to reshape it, or pull it apart at the seams. This is the often chaotic transition between “party systems”, as political scientists call them. The last time this happened was the election of 1940, when in the wake of economic hardship, the Republicans had no answer to a polarizing progressive president, and turned to a businessman with no government experience even though he held positions which were unusual for his party.

Sound familiar? They say history rhymes, but that businessman’s name didn’t rhyme with dump. It was Wendell Wilkie, and he lost badly to FDR, thus beginning the 5th party system which we are now seeing collapse.

So what does all this have to do with Rand Paul? It comes down to having the right idea at the wrong time. Paul has tried to appear more mainstream this cycle, and despite the heat he’s taken for it, I don’t find anything wrong with that strategy per se. Some criticize this pseudo populism on the grounds that it hasn’t worked well for Rand compared to his father’s more principled grassroots campaign. While that would seem to be a valid critique on the surface, closer examination of the polls tells a different story.

In the 2012 Republican primary, Ron Paul reached his peak at nearly 15 percent support in national polls, while in the 2016 primary Rand Paul peaked at 17 percent in 2013. Right away that should diffuse the idea that Rand did worse overall than his father, but still it sounds like only a modest improvement. That is, it sounds like a modest improvement until you take into account three important factors. 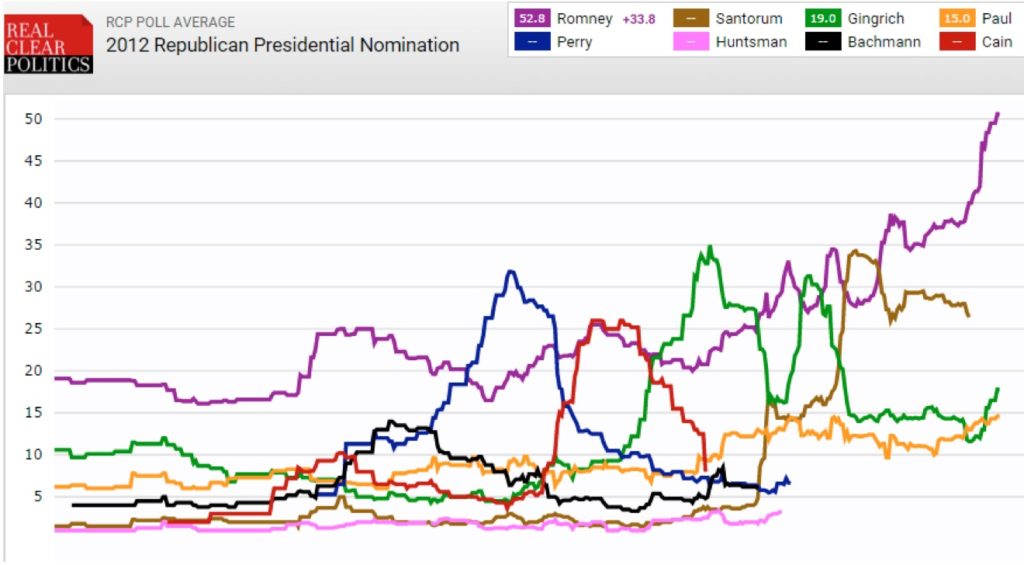 Firstly, Ron got his 15 percent when only two other candidates remained in the race, thus making it easier for each candidate to win higher percentages of public support. Rand meanwhile got his 17 percent when the field was still very turbulently divided among seven major candidates. Secondly, Ron was only very briefly in second place in an early field of seven candidates, after which he was relegated to third fourth and fifth place. As I mentioned earlier though, Rand was thrice the leading GOP candidate, and second or third for all of the time he wasn’t until late February, 2015.

Finally, there is there’s the matter of the thirty pieces of silver to take into consideration. I previously alluded to the media’s extensive efforts to silence the elder Paul in 2012, but you’ll notice that despite his little speaking time, Rand hasn’t quite been smeared the same way his dad was. In fact, by including him in this latest debate, CNN is actually going a bit out of their way to help him. The network had previously declared that only candidates who poll an average of either 3.5 nationally or 4.0 in Iowa or New Hampshire would be allowed to debate. Rand technically comes just .2 percent shy of the latter criteria, but they are letting him join the debate anyway. One finds it hard to imagine them extending the same generosity to his more hardline father.

None of this is meant as a knock against Ron Paul. Quite the contrary; if not for Ron there could certainly be no Rand, both in the obvious biological sense and the political one. Rand has inherited a large following which certainly helped him get as far as he did, and without his topical last name one does wonder if he would have been able even to succeed in the Kentucky senate race.

Moreover, it should be noted that Ron likely didn’t have quite the same objectives when he began his campaign as Rand. In contrast to Rand, I don’t believe Ron ever really thought he would be president, but instead used his presidential campaign as a platform to spread the ideas of libertarianism. By that metric Ron was wildly successful, as we can see by the relatively large share of the vote won by the libertarian party in 2012, and by the momentum of Rand Paul himself.

By those metrics, it remains to be seen whether the younger Paul will equal his father’s success, but in the conventional task of running for president, becoming president, it is fair to say Rand has gotten considerably closer with his strategy of putting on his “electable” shirt and giving his diehard supporters a nudge and a wink. Whatever strengths this strategy has to offer, one thing seems abundantly clear: it would be put to better use in calmer political waters. It does us no good to be admitted to the king’s court on the day he’s being hanged.

If that’s what Rand Paul’s admittedly dwindling chance at the GOP nod feels like, take heart. Libertarians have this to look forward to: if Trump or someone equally as unorthodox does take the GOP nomination, there will be plenty of disaffected conservatives for the LP to pick up. Despite this hope, one can’t help but think that it might have been better for Rand to have stuck with the hardcore libertarian firebrand strategy this year. In Rand’s defense, this is no ordinary year!