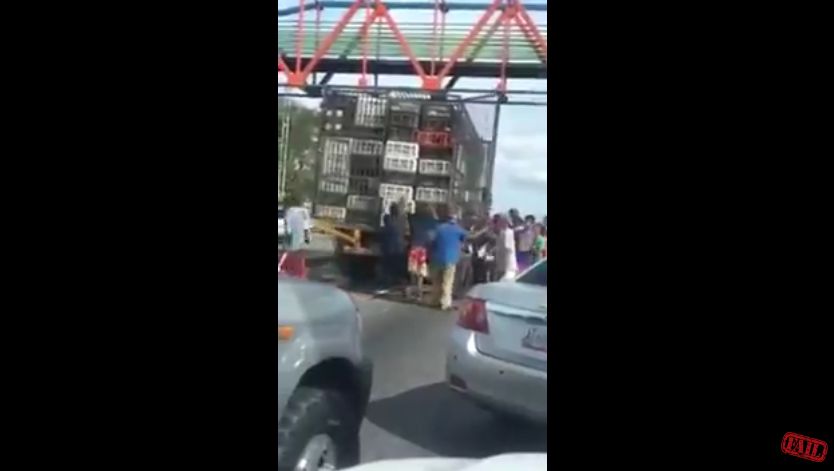 The starving people of Venezuela resorted to stealing live chickens off a truck just to feed themselves, according to a video posted to YouTube Friday.

A driver caught the scene while stuck in traffic on a major Venezuelan roadway. The footage zooms in to show a mob of people running to steal crates of live chickens off a truck.

People then climbed onto the truck and knocked down stacks of chicken crates like Jenga blocks.

Dumpster diving has become increasingly common in the Venezuelan capital of Caracas, with some residents subsisting on rotten foods and scraps found in the trash.

Venezuela is currently going through a slow-burning economic and political collapse. The International Monetary Fund (IMF) reported the the oil-rich country can expect a 720 percent inflation this year.

The South American country is overly-dependent on its oil sector and was hit hard by prices falling in 2013 — not long after the death of its charismatic Socialist leader Hugo Chavez. Current President Nicolas Maduro has had a difficult time appeasing his increasingly desperate countrymen.

The Venezuelan people elected conservative opposition politicians to lead the National Assembly, the equivalent of Congress, in December 2015 elections. The Socialist executive branch and the conservative legislature’s differences have left the country in total political gridlock.

It was reported in May that Venezuela is even running out of beer since the country’s largest beer manufacturer stopped production due to widespread shortages of raw materials needed to make the beverage.