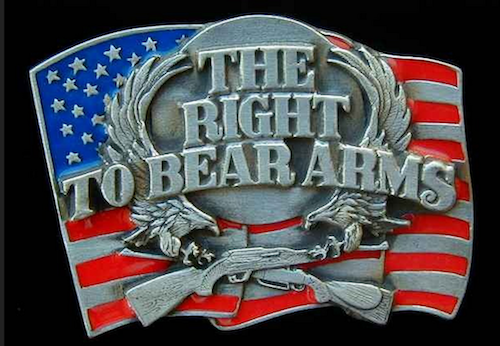 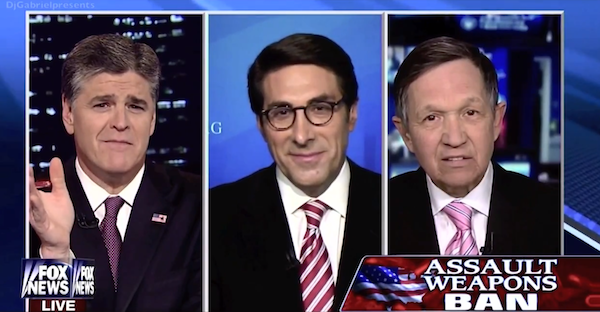 Former Congressman and newly minted Fox News contributor Dennis Kucinich defended the individual right to bear arms in an appearance on the Sean Hannity show yesterday. Kucinich’s recent addition to the Fox lineup was seen as a smart move by a man who lost his congressional seat due to redistricting in his native state of Ohio. Mr. Kucinich is widely known as an ardent social democrat with a strong civil libertarian streak. Although his willingness to cave to support President Obama’s corporatist healthcare scheme left many civil libertarians feeling burned by him. Sincere antiwar activists find themselves a bit of a hero in the mercurial democrat who supports constitutional due process and bringing the troops home from interventionist foreign military campaigns.

Kucinich appeared on Hannity’s show to talk about President Obama & VP Biden’s new gun control measures. Although in the past he has taken strong anti-gun positions to the point of hyperbole (“Babies are dying in the streets…. ban handguns!” Jul 2007), Kucinich took a stance in deference to the DC V. Heller decision that affirmed an individual right to own a weapon. He pushed it even further though when he claimed that people arm themselves for the express purpose of being able to defend themselves from a tyrannical government. Hannity responded to the social democrats revelation on individual rights with a “Beam me up, Scotty” and a toss to Jordan Sekulow from the American Center for Law & Justice for his response.

The recent school shootings of Newtown, Connecticut have opened up a wide ranging debate about the necessity for private citizens to own assault rifles in the United States. For nearly the entire eight years of the George W. Bush Presidency liberals served up rhetoric that pointed out the possibility of a fascist takeover of government, those calls for individual civil rights have gone silent since Barack Obama took office. Noted author and public lecturer Naomi Wolf was widely praised by social democrats over her column: “The Ten steps to Fascism” from 2007 that borrowed heavily from rhetoric about gulags and Nazi secret police. Today however, liberals pan conservatives and libertarians as paranoid nuts if they fear a government attempt to restrict their right to self defense. But why wouldn’t we when social democrats openly advocate the use of violence and force to achieve their goals?

Libertarians understand that when it comes to fascism as the boot on our neck, whether it’s a left boot or a right boot makes no difference. Bravo to Dennis Kucinich whose intellectual honesty appears to have led him to the same conclusion.

So what do you think? Does the constitution guarantee an individual right to bear arms in your opinion?

*Video* Should we ban billionaires?