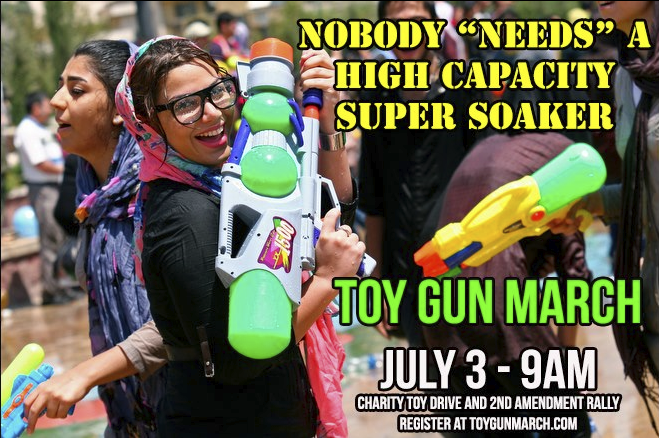 In the wake of gun control issues and in response to the controversial armed march originally planned for July 4 in the District of Columbia, a separate group of libertarian activists are inviting Second Amendment supporters and their families from across the country to join in a peaceful march through the National Mall on July 3 – armed with toy water guns. The  armed march has subsequently been canceled but the Toy Gun March has just been cleared with the National Park Service to begin at 9am at the Arlington Memorial Bridge and will be followed by family-friendly outdoor games, face-painting and speakers at 10:30am on the Washington Monument mall across from the White House. March organizers and National Park Service officers will be working together to ensure that this is a peaceful and fun event.

Austin Petersen, creator of the Toy Gun March, says the event is a protest to the renewed interest in limiting Americans’ rights guaranteed under the 2nd Amendment of the Constitution. Unfortunately, schools across the country have threatened our children’s safety by creating dangerous gun free zones, and have even disciplined students for playing with harmless toy guns as well. Libertarians care deeply about the safety and security of all people and want to clear up misconceptions about guns and promote responsible gun ownership.

Proceeds will go to Toys for Tots and attendees are asked to bring a toy gun for themselves and another unopened toy, book, or board game as a donation. The Toy Gun March has already raised $400 of the goal of $1,000.

Families are encouraged to stay and enjoy an afternoon of leisure with fellow Second Amendment supporters on the National Mall once the march is over. And since there will be a 160-gallon water truck standing by for gun refills, no one will have to worry about running out.

The event is being sponsored by Stonegait Pictures, The LibertarianRepublic.com, Ryan’s Project, and the Ladies of Liberty Alliance.