Should Democrats vote for Mitt Romney in the 2012 Presidential Election?

Certainly many will. There are always people who for one reason or another decide to support the opposing candidates for President. Some could be teachers angry at Obama’s lack of support after the teachers strike in Chicago. Others could be the liberals who, like Bill Maher, want our President to be an “Angry Black Man” to win. Unfortunately for the President, who long ago rejected his base, he can’t rely totally on the support of civil libertarians who have objected to his extrajudicial killings and crackdown on medical marijuana stores in California.  It would seem totally reasonable that anyone from these groups might cast a vote for the opposing team simply for the loss of Hope resulting from Changes never made.

Social Democrats in the United States seem particularly giddy these days at the rumored demise of the “Tea Party” movement. Polls that favor Democratic candidates in Senate races have left wing partisans licking their chops at opportunities like unseating Senator Scott Brown of Massachusetts and replacing him with a socialist redistributionist in the form of Elizabeth Warren. Republican House Representative Connie Mack in Florida could suffer a similar fate if the struggling candidate doesn’t pull from behind at the very last minute. It seems unlikely he will do so. Governor Romney’s disavowal of the Tea Party and conservative base of the GOP puts him at a very strategic ground game disadvantage. There is a very real chance that he will lose as well. That only means one thing.

America is on the verge of a nightmare scenario.

Four more years of President Obama and a sustained Democratic majority in the Senate could ignite what Frank Rich calls, “Rage Amongst Republicans” if Obama is reelected. While I’m sure no one expects to see old Republican ladies or frat boys wearing dockers rioting in the streets should Obama win, the social democrats in the US have threatened violence if the Republican ticket is victorious. One online supporter stated, “If Romney win , me obama and 2 chainz going to start a riot and shoot his ass !”

An Obama win will undoubtedly be in the short term worst interests of the United States. His antibusiness, and redistributionist philosophy absolutely harms investment by creating uncertainty and thus instability. A weak President does no good for an American economy. Ask Jimmy Carter. 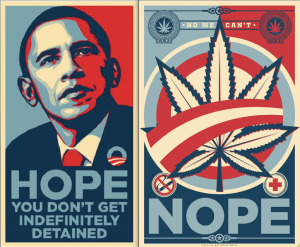 If President Obama wins again, there would be real anger on the behalf of the American people when the final phase of “Hope & Change” shows no real “progress” towards social democratic goals nor economic growth. Not just Republicans, but the entire American people would be victims of President Obama’s anti-growth agenda. What will happen to America if she goes to 2024 with no real economic growth or progress while other nations compete and outperform her in education, health care and other areas? Wouldn’t people be ready for some radical changes?

The pendulum swings to the libertarian right.

Liberal Frank Rich, writing for New York magazine writes why he believes the “Tea Party Will Win” saying  “This is a nation that loathes government and always has. Liberals should not be deluded: The Goldwater revolution will ultimately triumph, regardless of what happens in November.”

Rich goes on to sling mud at the limited government movement, invoking the nearly non-existent John

Birch Society as if to paint the entire tea party with a broad isolationist brush. However, Rich makes an astute observation  when Senator Mitch McConnell of Kentucky hired Jesse Benton, the former campaign manager for Ron Paul’s Presidential campaigns. This event appears to be mark a turning point for libertarians who have successfully elected representatives with Austro-libertarian viewpoints to the House and Senate and are planning to add more. Previously libertarians sole representative was Dr. Ron Paul of Texas whose movement inspired the Tea Party. Senator McConnell appears to be looking at avoiding a future Tea Party challenge from his right. Could it be that he sees the insurgency inspired by Ron Paul and his libertarians in the GOP as the future of the party? The Goldwater revolution feared by liberals is not the current faction in power. The Goldwaterites are the Remnant and the insurgent libertarians and tea partiers. If Senator McConnell sees the swing of the ideas going libertarian, he is doing what most politicians do, pander to the will of a special interest group. Namely, the libertarians.

Should ideologue Democrats vote for Romney?

Ideological Democrats have a difficult choice in the coming election if they are truly interested in expanding government. Social democrats that are sincere in their conviction that the State is the solution to societies ills, those who are uninterested in personal liberty, wealth redistributionists of all type should support Romney if they wish to see their agenda enacted long term. In 2012, the Democrats who want long term overall growth in government may have only one last chance before the “Republican Rage” boils over into real, sustained, long-term cuts in government spending and tax rates. A vote for Governor Mitt Romney accomplishes these goals by stemming the tide of tea party populism infecting the GOP and the push for a dissolution of central banking monopolies and fairer currency laws. If Democrats are serious about stopping the rightward push of the ideology of the GOP, voting Romney accomplishes that.

As Governor Romney has explicitly distanced himself from the Tea Party, the Democrats would be better off to have him elected. His ascension will give the establishment GOP control of the government and party in the short term, yes. But it would also give the libertarians and true “Tea Party” conservatives another four years to make hay while the sun shines during the chaos of a leaderless party. Tea Partiers and libertarians stand the most to lose from a Romney Presidency in that if the Governor of Massachusetts becomes President of the United States, he would consolidate power away from the grassroots and towards the establishment types. A Romney Presidency would deflect Old Right conservatives, tea partiers and libertarians from  making their Austrian brand of economics the majority viewpoint. In so doing, they will avoid drastic cuts that might come in 2016 if, say, a President Rand Paul were to become a reality. That would not be in the best interests of the social democrats at all. Romney at least continues a growth of government and maintains establishment control that can then be traded to the Democratic establishment in 2016 if necessary. A win for Governor Romney is a loss for the conservative grassroots and a win for establishment Democrats.

Social Democrats have the most to lose from a libertarian insurgency on the right. Despite their flirtations with more classical liberals over issues of drug legalization, civil liberties, war and privacy issues, there is no serious social democrat that is not first and foremost an economic redistributionist. An ascendent libertarian movement in the GOP might return the ideology the Party of Lincoln to a philosophy that rejects the New Deal along with Woodrow Wilsonian “Make the world safe for democracy” style military interventions. Again, not something in the best interests of those who desire a welfare/warfare state.

Though plenty of Marxists and Fabian ideas from Europe have spread throughout American society and popular culture, I believe that Frank Rich is correct. Americans really do hate government and will always hold the spirit of resistance to the over-centralization of power. The will of the American people seems to be ultimately against redistribution and for the principles of individual liberty & personal responsibility. That was what she was founded on and it is ultimately where she is likely to return. To a more peaceful, humble, libertarian republic.

“The House I Live in” Drug War Documentary Review