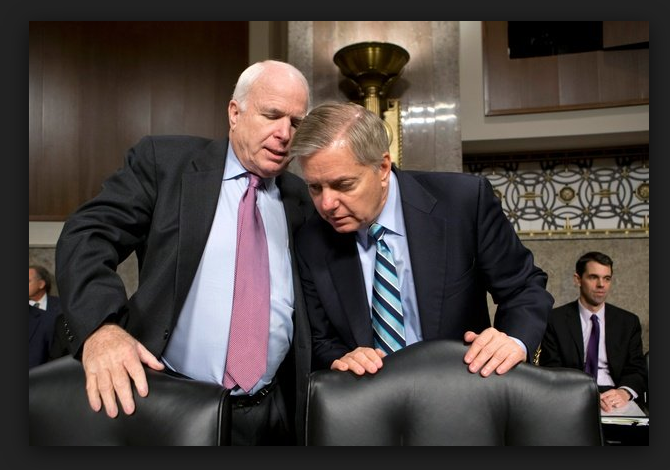 What could possibly go wrong?

Senators John McCain and Lindsey Graham rang a familiar tone about chemical weapons on the floor of the Upper House Thursday when they called for America to back Al-Qaeda affiliated rebels in Syria against President Bashar al-Assad. McCain and Graham called for a no-fly zone and to destroy al-Assad’s planes & airfields. Graham spread fears about the spread of radical Islam while calling for a full military defense of it as McCain looked on. Graham believes that by destroying al-Assad’s airfields. Patting each other on the back for their support of Syrian rebels, Graham and McCain happily offered up citizens tax dollars in order to fund rebels that could engage in potential future terrorist attacks on the United States.

McCain acknowledged Americans war weariness while calling for more war and tax dollars to intervene in Syria. Although there is no national defense threat from Syria to the United States, the warhawk senators called for President Obama to end genocide, despite lacking the constitutional authority to do so.