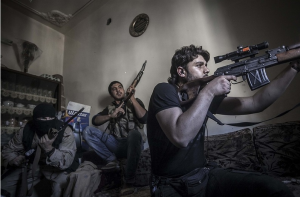 Former Congressman Ron Paul told Fox Business Network’s Neil Cavuto that the United States is already involved in Syria, where a rebel uprising is attempting to depose the government of Bashar al-Assad. Paul was asked if we should just stand by and allow Syrian citizens and rebels to be victimized by chemical weaponry. The Texas congressman’s response was that there are war zones all over the world where crimes are occurring and he wondered why we don’t get involved in all of these conflicts. Paul argues that our national security is not at risk because of the events in Syria and we should not be needlessly engaging in hostilities that will be costly in American blood and treasure.

Ron Paul’s non-interventionist viewpoint is challenged by the mainstream neoconservative viewpoint that it is the responsibility of the United States to spread Democracy at the barrel of the gun around the world. The septuagenarian congressman has retired from politics but is still speaking out on foreign policy issues that get America needlessly bogged down in police actions and don’t benefit the citizens who are taxed to pay for it.

Paul attacked the military industrial complex, claiming that it seems like you can’t even criticize military spending without appearing unpatriotic. He wonder if there will ever be a time when it’s possible to discuss cutting budgets if the Wilsonian democrats who currently are in charge of foreign policy remain in control.