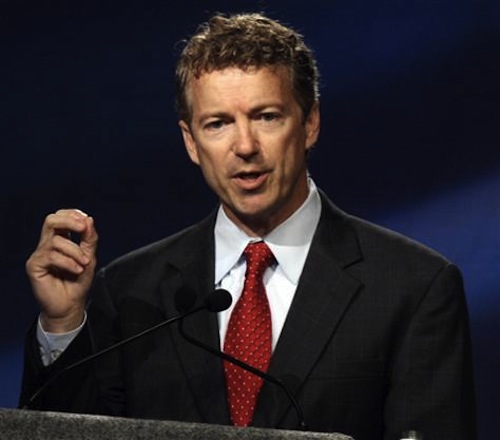 According to the Hill, an aide from Paul’s office explained that the liberty Republican plans to introduce a measure to disapprove of the sale on Wednesday, over concerns that the deal may pull the U.S. into Yemen’s civil war.

The Senator explained his concerns to Breitbart in an exclusive interview:

There’s an arms export legislation from the 1970s and it gives the power to one senator to ask for a vote if they object to an arms sale. I think that by selling Saudi Arabia more arms, we further the arms race. We encourage more arms to be bought on both sides of the arms race. I think that there’s evidence that Saudi Arabia has been involved with terrorism. One of the leaked emails from Hillary Clinton was her saying that ‘my goodness, Saudi Arabia and Qatar are funding ISIS in Syria—we need to do something to get them to quit funding these radical groups. So there’s a lot of evidence. There’s even evidence going back to 9/11. Sen. Graham—Bob Graham—said that he thought that there was from the 28 pages and other evidence that there was a great deal of evidence pointing to Saudi Arabia’s government actually being involved in 9/11.

The motion by Paul would allow him to then force a vote on the deal in June. Under the Arms Export Control Act, he can bring the measure up on the Senate floor after 10 calendar days, but the Senate is leaving town on Friday for a week-long Memorial Day break, reports the Hill.

Paul, who has long been a critic of arms deals in the middle east, tried this same tactic with the Obama administration. In September, the Senate overwhelmingly rejected the move from Paul to halt a $1.15 billion arms sale between the U.S. and Saudi Arabia, explained the Hill.

Breitbart explained that Paul did praise the President’s efforts to further Saudi Arabia’s assistance in fighting ISIS, while warning that the Saudi Arabia may not be so keen on changing their ways from previous support of such groups.

“I think it is a good idea that he’s telling and encouraging the people who live there to do something about ISIS, if Saudi Arabia would do something about it,” Paul said. “The problem is in the past Saudi Arabia has actually been supporting radical groups like ISIS. I don’t really trust them to do it. Also, in the neighboring country of Yemen, they’ve been indiscriminately bombing. I’m afraid they’ll use some of our weapons to bomb civilians. About six months ago they bombed a funeral procession, killing 124 civilians and wounding 500. I don’t want that to be done with American weapons. I think that gives us a black eye in the area and it actually may create more terrorists than it kills.”

Paul is not the only critic of the deal, Rep. Justin Amash took to twitter to reshare his op/ed for Rare, in which he criticized Obama’s deal with the Saudi’s which the Congressman characterized as being “1/100 the size” of Trump’s.

Here's my op-ed criticizing the Obama administration for an arms deal with the Saudis 1/100 the size of this one: https://t.co/TbgizGmrfq. https://t.co/BfUi2ZgWsF

The deal between the US and Saudi Arabia is said to include U.S. missiles, bombs, armored personnel carriers, Littoral Combat Ships, terminal high altitude area defense missile systems and munitions, according to the Hill.