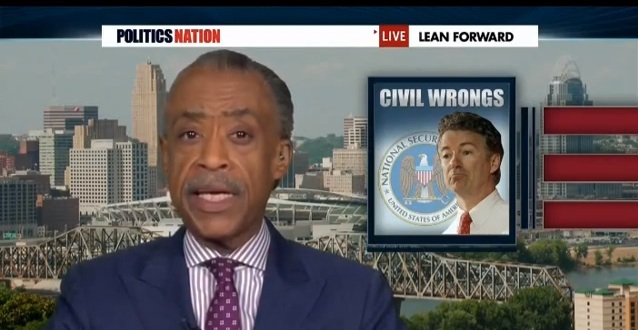 Only Race Hustlers Can Talk About Race & Civil Rights

“The possibility for abuse in this is incredible,” the senator added. “So I don’t care if there’s never been any evidence of abuse with the NSA. They should not be collecting the data.”

Paul’s message was enthusiastically received with a standing ovation at notoriously liberal Berkeley College when he gave a speech there last week. But the liberal race baiters of the media establishment were none too pleased.

Reverend Al Sharpton took to the airwaves to return fire at Senator Paul, playing defense for the Obama regime and invoking faux outrage over Paul invoking race in a discussion over civil rights. It seems that only ineffective minority leaders are allowed to speak out on civil rights issues. Sharpton criticized Senator Paul, calling him mistakenly by his father’s name in a short segment on MSNBC.

“Where does Ron [sic] Paul get off talking about race and civil rights at all?” Sharpton asked. “That’s inexcusable,’ he says.

Google CEO to Leave Billions to SpaceX in Will (VIDEO)