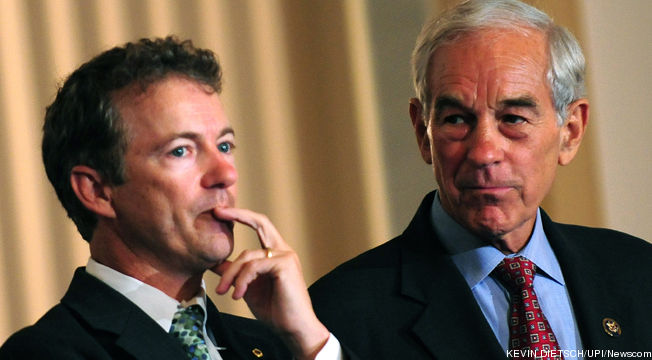 Senator Rand Paul recently won the Conservative Political Action Conference straw poll for the third year in a row. This straw poll is supposed to be an indication of who conservatives may prefer in the next election, but considering that Rand’s won it for three years and his father the two years before that, it’s a far cry from the more predictive quality of the New Hampshire primary.

His supporters are very excited. Rand is definitely the most interesting contender for the Presidency this election cycle. His work on trying to curb the NSA, protest drone strikes and create awareness about the terrible consequences of the drug war are some reasons that he’s not just popular amongst libertarians but is likely how he’s gaining traction in a country where the people are becoming more distrustful of government and by generation, more libertarian.

We likely have his father, Ron Paul, to thank for much of this. He laid the first pieces of kindling, inspired many young people into libertarianism, and has helped make mainstream the ideas that the Senator Paul is now leading with.

Where there were embers there is now fire.

I volunteered on the Ron Paul primary campaign in 2008, canvassing, waving signs, and getting Ron Paul where he needed to be for stump speeches in New Hampshire. I have enormous respect for him, and have since I was a little girl – my parents were supporters back in his 1988 run as a Libertarian candidate. It’s because of him that I encountered Peter Schiff during that campaign, and in 2013 went to work for Euro Pacific Capital. We have our disagreements – I tended to not like Ron’s positions on immigration or abortion, but I ultimately felt the country is benefitted greatly by his voice being amplified, even elected. I still feel that way.

Rand Paul is not his father. There are some things he’s better on, there are some things he may be worse on. Of course, it depends on your perspective. Rand has said he’s not a Libertarian, and he’s catered to the far right more than I am generally comfortable with. I realize he’s not perfect. I understand also that politics is a game, and that he’s got to play within the rules to win his party’s nomination. I do want that. As much as I’ve called him out for various ideological differences, I still think the country is benefitted greatly by his voice being amplified, even elected.

Within libertarian circles, the opinions are mixed, but they’re often tremendously black-or-white. You apparently cannot have a middle-ground opinion on either man. There are libertarians I know who cannot stand to see anyone “in the movement” disagree with either Paul publicly because it’s “divisive”. Whereas, referring to a recent interview Ron Paul did with Lew Rockwell, many of my more liberally minded friends (and hardcore libertarians) called out Ron for being racist. Never mind the comments in question are actually contextually logical but ill-phrased: most people on the left would prefer not to go to war because the money the government spends would presumably be better spent on services at home. Someone like Ron Paul would prefer to see that money not be taxed into government’s hands at all.

However, even if that statement were a racist one, or if Ron Paul happens to be a racist for other reasons, I don’t judge Rand Paul by his father, because I’m not a collectivist and I don’t judge people by their genetic heritage.

Now, Ron Paul and Rand Paul are both far more conservative than I am, and neither are members of the Libertarian Party. As a result, they will be less than perfect candidates for those of us who have been purists on libertarianism. That does not, however, make them bad for the libertarian cause.

In the past, I’ve been notoriously hardcore about my Libertarianism. I stepped down as Vice Chair of the New Hampshire Libertarian Party because I didn’t feel our presidential candidate was Libertarian enough. However, I did turn around and work for two non-Libertarians that year, because I don’t hold people outside my party to the same standards I hold people inside it.

Being in a position to affect change is so essential to a movement that requires change in order to succeed. I may not be in love with everything Ron or Rand Paul has ever said, and I may have problems with their positions, things they did decades ago, or even things they do now.

Frankly, liberty is finally starting to take hold, however imperfectly. Sheldon Richman recently wrote a piece for Reason I was so happy to encounter and will amplify all day long to libertarian audiences: Are Libertarians Looking For Results or Self-Congratulation? This is so essential to discuss. He quotes a talk by Nathaniel Branden regarding the success of the Libertarian Movement in 1979. Other writers, more recently, have also begun to discuss the need to step back from natural contrarianism which is so prevalent within the liberty movement.

Branden said it so well:

“So one of the signs that we want to look out for, and one of the most important signs, happens in how we approach communication. Are we really out to reach human beings? Are we really out to build a bridge to somebody whose context may be very different from our own? Do we still remember that a lot of what we now regard as self-evidence once upon a time wasn’t self-evident? Or do we walk into a conversation on the premise: I’ll give you one chance, after which you’re irredeemably evil?

As we see more and more individuals led into the libertarian movement by “imperfect” libertarians like Ron or Rand Paul, we cannot sit idly by and be upset if they come in and start widening the tent and adding their own flavors to the mix. We have to engage, prepare and be willing to meet them where they are, to apply their libertarian leanings to the places they are lacking those inclinations, and bring them into the fold.

Every single person who becomes a libertarian on an issue I value, is a benefit.

If Rand Paul can win his party’s nomination, I wish him all the best in winning the election and he’ll likely have my vote. Not because he’s perfect, not because he’s a libertarian, but because by amplifying his ideas, more people will come into the libertarian movement. I’ll be welcoming them with open arms, and fighting for freedom together.

Should We Really Crucify Someone If They’re Accidentally Racist?