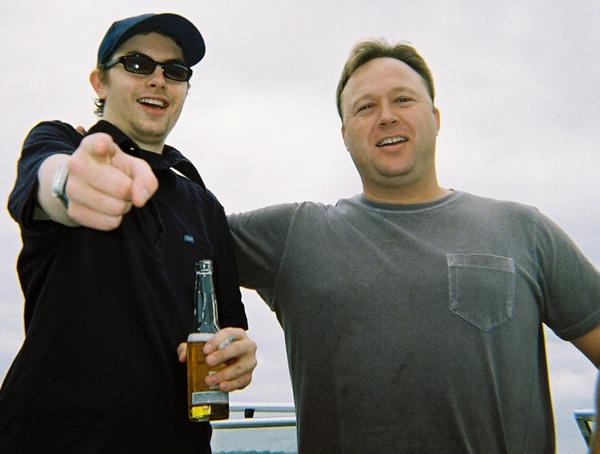 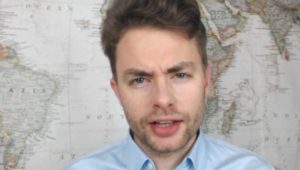 What do you call someone who uses every epithet in the book, who fear mongers, employs out-dated information and ad hominem attacks, enjoys a lack of thought-provoking originality, and is a major hypocritical mouth piece for one of biggest bloviators to ever speak into a microphone? Paul Joesph Watson.

Watson, who was a “libertarian” until he was so triggered he could no longer identify as one, is the editor-at-large of Alex Jones’ conspiracy site Infowars. He has made his name by going on conspiracy theory tirades about things like how Jay-Z is a major player in the Illuminati. More recently however, he has become known for coming out swinging against the current Libertarian presidential ticket of former governors Gary Johnson and Bill Weld. He criticizes them in his video aptly named “Gary Johnson Is An Idiot” for not being libertarian enough, taking votes from Donald Trump and blaming the ticket for his dissociation with the libertarian title.

During his unimaginative and poorly cropped together video, Watson hashes over his criticism of Johnson, with the typical “we are all going to die” tone that is usually used by anyone closely intertwined with Alex Jones. He brings up the fact that Johnson at one point in his campaign mentioned that “If it [vaccines] ends up to be a federal issue, I would come down on the side of science and I would probably require that vaccine,” a position which would violate a key principle in the Libertarian Party’s (LP) platform, the non-aggression principle (NAP).

Watson continues on explaining that Johnson also during his current campaign at one point was for the Trans Pacific Partnership (TPP), and was open to the idea of carbon taxes. All of these things on their face require no further looking into, and meet Watson’s claim that they are “not libertarian.” Furthering his point as to why Johnson is a “fraud,” Watson, misrepresents what he calls Johnson’s endorsement of Black Lives Matter (BLM), and then goes into an odd diatribe about how his position on Syrian refugees entering the United States also violates the NAP.

Unfortunately, it did not stop there, Watson moves to his ad hominem and less fact-based attacks, and started calling Johnson a social justice warrior for taking issue with the term “illegal immigrant,” and played clips of Johnson calling Donald Trump a racist on loop. He also lambasted anyone who would vote for Johnson as idiots. Weirder yet, he seems most offended by the fact that Johnson’s candidacy could cost Trump the election in favor of Hillary Clinton.

Now, it is fair to be said that the Johnson/Weld ticket, when they step away from the ideas of liberty, should have their feet held to the fire. After all, they are representing a party of principles. Principles, again, in which Watson self-proclaims to believe. Watson does hit some areas of genuine criticism of the LP ticket, such as the “bake the cake” position, New Mexico’s debt, and Gary having thrown away a token of unity at the Libertarian National Convention. Notwithstanding those however, Watson still proves you can still be a hypocritical idiot, even if you clip together a poorly argued and fallacy-ridden video.

See, the problem is that Watson apparently doesn’t hold himself, his chosen presidential candidate Trump, or even his boss Alex Jones, to the same standards he has levied upon the Libertarian ticket. Apparently according to Watson’s statements in his video, and the premise he sets, you must toe the line of liberty at every turn, never forgoing principle for votes, and you must never hurt Trump’s chances of winning the election. You are also apparently not allowed to update facts that may hurt your argument, explain the context of potentially awful-sounding soundbites, or point out your own double standards. And of course, holding to the Infowars standard, you must use a fearful or dramatic overtone to drive your narrative.

For example, in his video, Watson negates to mention the fact that when it comes to mandatory vaccination, TPP, or carbon emission taxes, that his sources of information are old news. The facts have changed as Johnson has clarified his statements since the original incidences occurred. Continuing on, Watson and his claim that Johnson “endorsed” BLM have been extremely over blown, if not taken completely out of context. This is a point which even Brandon Morse of Redstate, a staunchly conservative website, has said that he isn’t worried about.

With even more hilarity, Watson in his video seems to really take offense to the fact the Johnson could be “taking votes” from his presidential pick Trump in key states. He quotes a hypothetical piece by the ChicagoTribune which is titled “In Arizona, Gary Johnson Could Play Spoiler In Presidential Election,” as his hard evidence of this happening. Now if Watson wanted to look at real data that is based in more reality than hypothesis, he could have rejoiced in seeing that as reported by The Libertarian Republic and according to multiple other sources, Johnson actually pulls more votes from Hillary Clinton than from Trump. But this would just not fit his anti-Johnson narrative.

So now we ask the question, beyond all the aforementioned information, all the insanity that is Watson’s anti-Johnson video rant, what is the biggest reason he is a completely hypocritical idiot? Other than his spot at Infowars, helping spreading conspiracies like that of the pre-opened pickle jar, of course.

Its the fact that he does not hold his own choice for president to the premise he sets to criticize Gary Johnson. After all, there are very few things on which Trump is even remotely libertarian. Trump is far more authoritarian and progressive than Johnson could ever imagine to be. With Trump’s comments on immigration, and on how now is the time to borrow more money due to low interest rates, to his stances on a larger police state, a federal minimum wage, a stimulus package twice the size of Clinton’s, support for ban of gun sales to people on the Terror Watch List, a want to open up the libel laws against the media, forcing companies to stay and produce in the US, and raising tariffs on imports/exports, Watson is a hypocrite of the largest proportion for his support of Trump and criticism of Johnson. If he spent 5 minutes to do a quick Google search, he could find a video where Trump essentially says the Constitution is not always relevant, and he could also find that statements Trump has made would violate the 1st, 2nd, 5th, 6th and 14th amendments at the very least.

It gets better though, because another one of Watson’s criticisms of Johnson was that Johnson said that Clinton was “a wonderful public servant” and that vice presidential candidate Bill Weld has a long standing favorable and personal relationship with her.

Does he not know that the Clintons were at Trump’s third wedding, that Trump’s Foundation and family have donated to the Clinton Foundation and that Ivanka, Donald’s daughter, and Chelsea, Clinton’s daughter have said they are close friends? Or that for the majority of his life, Trump identified as a Democrat? It is odd how he leaves these facts out while opining that he would rather you sit out the election if you don’t like Trump or Clinton than vote for Johnson.

It is fairly obvious and transparent that Watson doesn’t really care about how libertarian anything is. What he does care about is shilling for his candidate like his boss does and blasting someone who apparently triggers him so badly he has to make a 10 minute video about it. Maybe someone should make a video called “Paul Joseph Watson Is A Completely Hypocritical Idiot.” On second thought, maybe what should be done is to simply go out and vote for Gary Johnson, as this seems to rustle his jimmies enough.

BREAKING: Mitt Romney Calls for Johnson and Weld to Be Invited to Debates