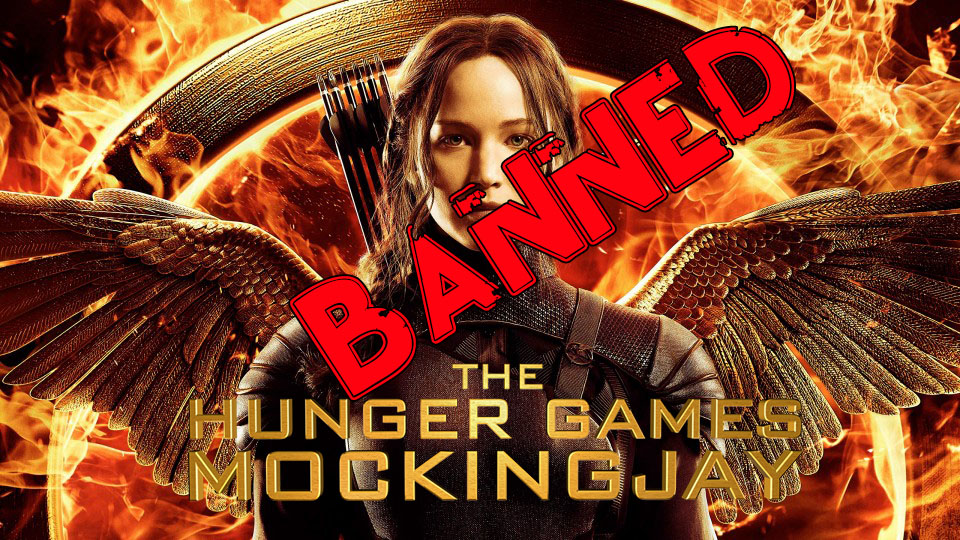 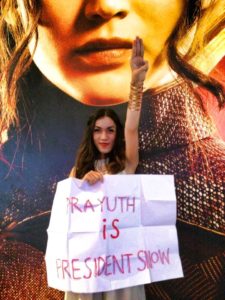 KHON KAEN, THAILAND – The Anti Media is reporting on an interesting story from Thailand where a theater chain has banned the showing of the popular new Hunger Games film “Mockingjay.” The Bangkok Post reported that Apex Cinemas would refuse to play the film because of a student protest which recreated the salute used throughout the movies.

Management for the Apex theatre received an order for 200 tickets to the film’s premiere and found out later that they were being given away for free. The League of Liberal Thammasat for Democracy on Sunday posted that it would give away the tickets to the film as parts of its “Raise Three Fingers, Bring Popcorn and Go to the Theatre.”

The Facebook post asked: “How does the Capitol resemble Bangkok?” Winning commenters were given 80 tickets for free. 241 people were posting as of yesterday and the theater chain was said to have been contacted by police. In order to “keep the peace” they have cancelled screenings of the film.

Activists have been rallying in solidarity against a military coup which recently took over their country. Thailand’s newest Prime Minister is General Prayut Chan-o-cha, who took power on May 22nd. Student activists managed to sneak past the Prime Minister’s security to flash the three finger salute of solidarity which is featured prominently in the Hollywood blockbuster films starring Jennifer Lawrence.

From The Anti Media:

Chan-o-cha was speaking in Khon Kaen, a region in northeastern Thailand. The students slipped into the event wearing shirts reading “We don’t want the coup,” making the three-finger salute before they were arrested. In the Hunger Games, it is a sign of dissent against the fictional, tyrannical government, Panem. According to thePost,

“Prayut appared to laugh off the challenge to his authority. ‘Well, that’s it. But it’s okay. Go easy on them. we will take care of the problems. Any more protests? Make them quick.’”

Sounding eerily like President Snow of Panem, the military dictator did not actually intend to go easy on the youths:

“The student demonstrators, identified later as Wasan Seksit, Jetsathit Namkot, Jatupat Boonpatraksa, Phayu Boonsophon and Wichakorn Anuchon, were grabbed by police and military security as they showed off their T-shirts and salutes. They were taken to the 23rd Military Circle’s Sri Patcharin base to undergo ‘attitude adjustment,’ according to officials.”

They were released but ordered to report back with their parents the following day to face charges of breaking martial law. Current reports differ on whether or not students signed an agreement to halt any political activities. 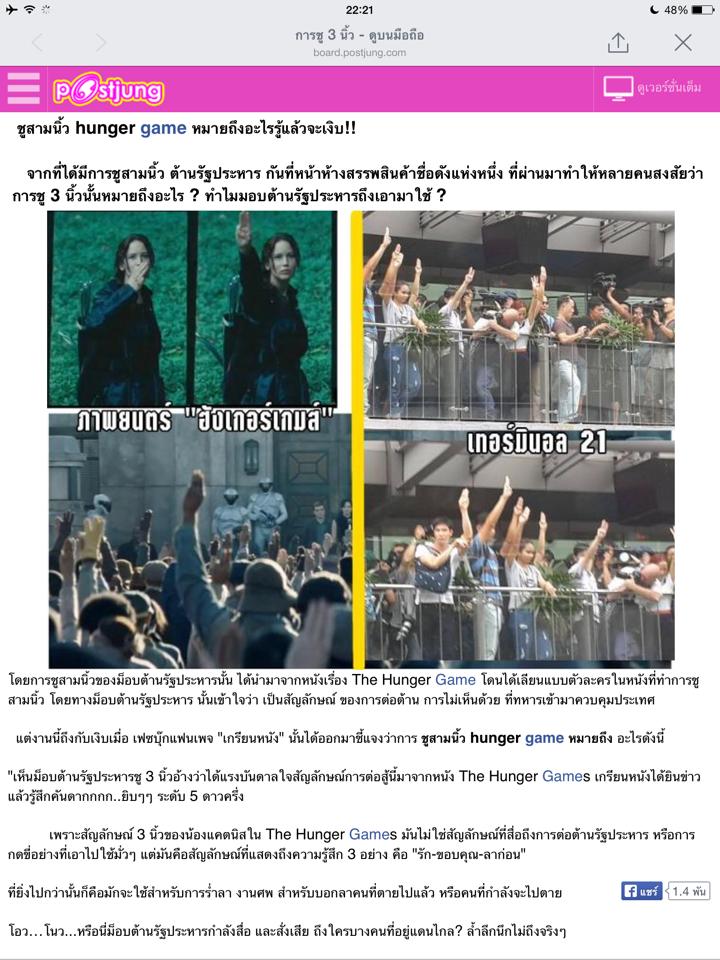 Prominent libertarian writers have praised the Hunger Games films and books, in that they show a resistance to central government and economic planning. Despite the fact that the books and films center around violence, it’s been called a “Tea Party Training Manual” for people who believe that their government has become tyrannical.

Lucy Steigerwald writing at Reason magazine pulled together some of the most libertarian aspects of the film in her dissection of the story’s bona fides.

1. “As long as you can find yourself, you’ll never starve,” Katniss recalls her father telling her. In this case, the play is on her name, a sort of bluish tuber that she claws up from a riverbank. The book begins on this note of ultimate self-reliance, that only the individual can keep life alive.

To avoid starvation with help from the government, one must enter a devil’s pact. While all citizens are entered into the Reaping, a lottery to decide which boy and girl will be sent into the hellish Hunger Games, citizens can opt to enter their name more than once for a year’s supply of vital – but meager – foodstuffs. And the entries are cumulative each year from age 12 to age 18.

If you can provide for yourself, the Hunger Games tells us, you can make it through. If it’s government help you want, the price may be your very life.

2. “District 12: Where you can starve to death in safety,” Katniss laments near the book’s outset. It’s forbidden for the people of Katniss’s district to venture out into the woods to hunt, fish, or gather plants. Here one could hear echoes of the cries of libertarians, crying out against a government that by securing total security has all but destroyed liberty.

In other words, one must rely on themselves to survive, even in the face of a government that restricts almost all avenues to prosperity.

3. Government bureaucrats, a favorite libertarian target, get a very harsh reading. Not only are Panem’s paper pushers aesthetically and culturally bankrupt, the book makes clear, they consider themselves far superior to people from the nation’s 12 districts.[…]

4. Lazy, capricious and warmongering. And it’s the last third of those that is most accentuated in the Hunger Games. In the modern libertarian movement, the answer to war is to stop “policing the world.”

Libertarian’s hold that a force capable of defending the United States should be the mission ofAmerican military spending. Simply put, the goal isn’t to find ways to insert oneself into conflict but to protect oneself and fight if attacked. Petaa, Katniss’s fellow gladiator from District 12, gives a succinct statement that weds a libertarian instinct about violence to his desire to subvert the entire violent system.

“No, when the time comes, I’m sure I’ll kill just like everybody else,” he says. “I can’t go down without a fight. Only I keep wishing I could think of a way to… to show the Capitol they don’t own me. That I’m more than just a piece in their Games.”

The new film is causing a great amount of discussion amongst a great many peoples of the world about individual liberty and the role of government. This latest act to stop activists from rallying for liberal democracy is a great example of that.

Does Congress Need To Be Bribed To Do Its Job?