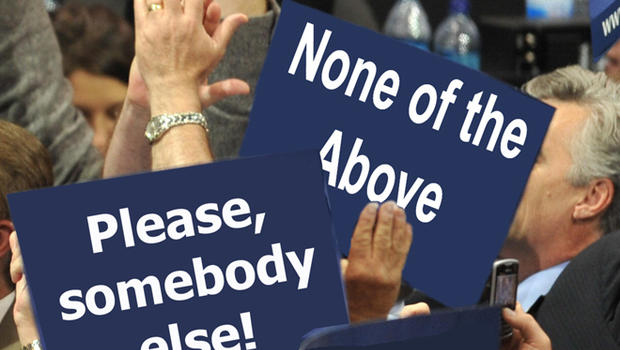 A recent proposal by State Senator Branden Petersen (R-MN) would place “None of the Above” as an option in elections. Under Petersen’s plan (which would be binding in all but presidential contests), if such option were to receive the most votes in a November election, a special election would be held with new candidates in February. Any candidates who had been listed on the prior ballot would be excluded.

The only state to currently have a similar law is Nevada. In contrast, Nevada allows the top vote-getting candidate to prevail, an occurrence which took place in last year’s Democratic primary for governor, as Robert Goodman finished second to “None of these candidates,” yet still received the gubernatorial nomination. Similar proposals have been introduced in several states, but none have prevailed.

The chances of Petersen’s bill becoming Minnesota law are (even by his own admission) unlikely. However, he has stated that he hopes that the proposed legislation will present an opportunity for frustrated voters to ponder a rather novel concept. Said Petersen, “This would give people an opportunity to really make a strong statement in rebuke of the present dynamic. It would be an honest check on the two-party system. This gives people a chance to legitimately voice their opinion.”

In current-day America, too many citizens see elections as meaningless and as a choice between the “lesser of two evils.” With most Republicans and Democrats seemingly having no real principles, and all too willing to negotiate away the liberties of Americans in order to win political points, voters have rightfully felt discouraged. As we move closer to a possible Jeb Bush vs. Hillary Clinton match-up in the 2016 presidential election, any previous skepticism is now becoming all too real.

Under the leadership of both parties in the White House and Congress, government has grown exponentially larger, increasing the size of the deficit while engaging in more unnecessary foreign entanglements. Nearly every facet of our lives is now closely regulated by government. Socially conservative Republicans take such action in the name of “moral good” while fiscally liberal Democrats do the same because of “social obligations.”

With “independent” becoming the most popular political identifier, most Americans have grown tired of the antics of both parties. However, a lack of comparable resources has prevented any other political parties or non-partisan voices from becoming major forces in elections. Any “third party” that does try to get involved (most often the Libertarian Party) is labeled as a “spoiler” that does nothing but “steal” votes from one of the major parties. Thus, even if some voters agree with a candidate on all of the issues, if that candidate does not have a “D” or “R” next to their name, they will often be warned against “throwing their votes away.” These issues are what occur if such candidate is able to get onto the ballot in the first place. There are numerous hurdles to even get to that most fundamental starting point, most notably a lack of funding.

This Minnesota proposal is just the latest news substantiating an outcry against how we, as a citizenry, have seen our government perform, particularly over the past several years. As much as politicians talk about their beliefs and platitudes, all of those talking points seem to disappear once they take office. Even those with initially positive intentions all too often seem to be infected by the tone of status quo politicking. While much is promised, little is done. Personal ambitions overtake policy goals, as complacency takes effect.

No one reform will change how government performs its duties. However, by in small ways bringing attention to corruption, as well as our dissatisfaction with the performance of elected officials, we can empower ourselves to make changes. Maybe “None of the Above” is the candidate we have needed all along.

Judge Tells Ex-Wife Of Divorced Millionaire to ‘Get a job’