It has been a fantastic week for public relations nightmares. First, Pepsi tried (and failed) to use social activism to sell a second-rate cola. Then, United Airlines violently removed a passenger from an aircraft to accommodate a non-paying United employee. Next, Sean Spicer did what he did best: shove his foot in his mouth. The White House Press Secretary accidentally omitted the existence of the Holocaust while comparing Assad to Hitler.

Just when we, at The Libertarian Republic, thought this week couldn’t hold more boneheaded public relations moves, we were wrong.

How The LP Shot Itself in the Foot…Again

As many of you are aware, we are in the midst of Holy Week. This week, Christians celebrate the time immediately before the resurrection of Jesus Christ. It began last Sunday (known as Palm Sunday) and ends on Easter. So, what do the wise sages at the LP social media team decide to do?

Why, they choose to quote the Church of Satan, of course! 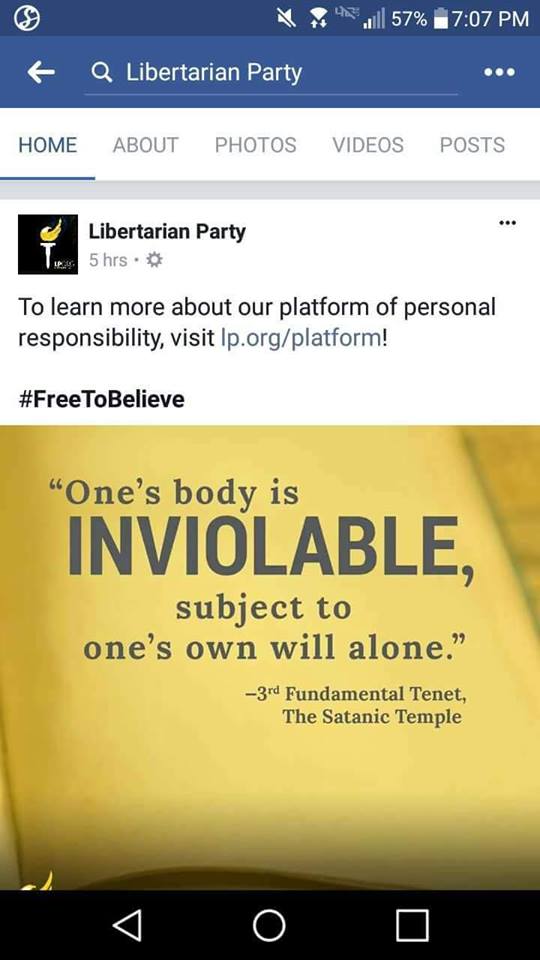 Now, the Libertarian Party’s social media team has never been accused of being smart. They are well known for reposting content from Free Thought Project and countless Anarcho-Capitalist memes. Once, they even were so foolish as to post an image declaring “No Bushes, Clintons, or Pauls“. It does not take a PR guru to tell you to not attack Ron Paul or Rand Paul, who are some of the most influential modern libertarians.

The post in question was eventually deleted from the Party’s Facebook page, but unfortunately it was already too late.

It goes without saying that libertarians are a fairly thick-skinned bunch. We have to be. Quoting the Satanic Temple on Maundy Thursday, however, is a bridge too far for many. They accept a party that is apathetic to religion. However, they do not support a party that openly mocks their faith.

If the LP is serious about becoming an actual force in politics, it can start with firing whoever runs their Facebook page. They’re doing more harm than good.